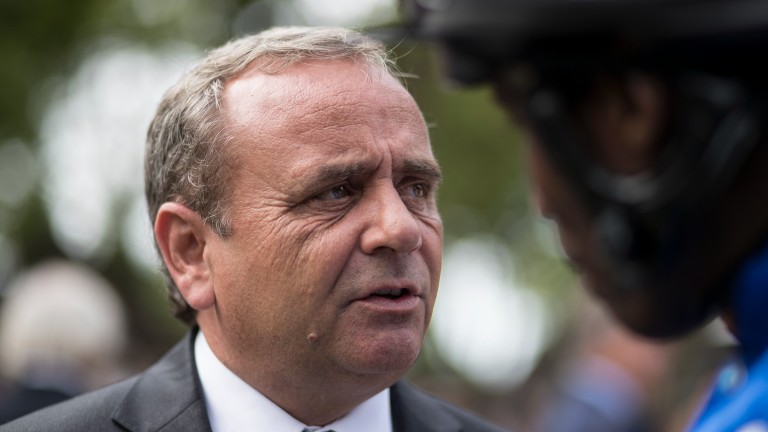 Andreas Wohler: top German trainer to be represented at Lingfield on Sunday
Patrick McCann (racingpost.com/photos)
1 of 1
By Sam Hendry UPDATED 8:55AM, JAN 19 2022

Andreas Wohler, one of Germany's most successful Flat trainers, has already conquered the Melbourne Cup and King George VI and Queen Elizabeth Stakes on the international stage, and now he is setting his sights on the Cheltenham Festival in March with exciting bumper horse Estacas.

Wohler has won multiple Group 1s in his homeland as well as striking gold in Australia with Protectionist in 2014 and at Ascot with Novellist a year earlier.

He is now set to launch a raid on the British jumps scene with five-year-old gelding Estacas – who is currently a best-priced 25-1 chance for the Weatherbys Champion Bumper – entered at Lingfield on Sunday (12.50) for a run which will determine whether or not Wohler follows through with his Cheltenham plan.

He said: "You don't have these kinds of horses very often. He came to hand quite late as a racehorse so that's why we're taking our chance on the National Hunt side, but he can still go on the normal Flat as well.

"The plan in our mind is to go for the Champion Bumper at Cheltenham. Sunday has to go really well, though, or else it wouldn't make sense."

Wohler has only ever had three jumps runners in Britain, and none for almost ten years until Estacas struck on his racecourse debut at Ascot in October.

He was the 3-1 favourite that day and looked in trouble turning for home before finishing powerfully under Jamie Moore, who is booked to ride again on Sunday.

Wohler reports Estacas to have improved since his Ascot appearance and is hopeful of another good showing, this time on Lingfield’s all-weather surface.

"He's improved quite a bit from his first run at Ascot so we're looking forward to getting him out again in another bumper and he'll travel over on Friday," the trainer added. "That was his first run and it came after a long journey, so he learnt a lot that day."

Should he make it to Cheltenham, Estacas would be a rare runner at jump racing's showpiece event for late legendary sire Galileo, who has had offspring Supasundae and Celestial Halo strike before at the festival.

Read more on the Winter Million:

Winter Million at Lingfield: what is it and which horses are in contention?

FIRST PUBLISHED 7:00AM, JAN 19 2022
The plan in our mind is to go for the Champion Bumper at Cheltenham. Sunday has to go really well, though, or else it wouldn't make sense