He's back: Frankie Dettori to have first British ride of the year at Lingfield 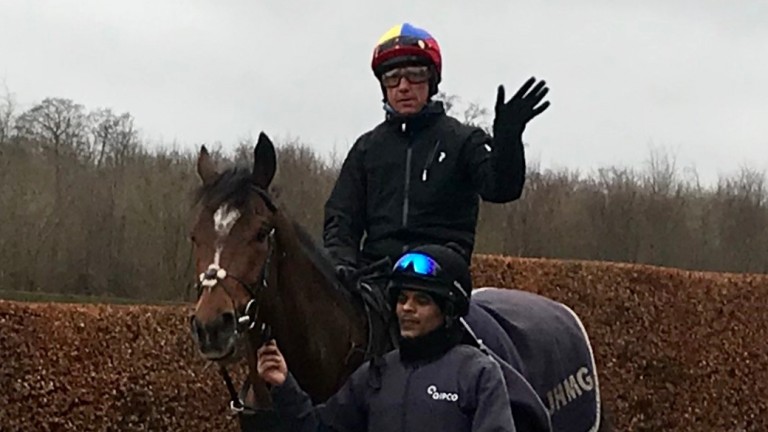 Frankie Dettori is booked for his first domestic ride of the season at Lingfield on Saturday, partnering Dubai Warrior in the Group 3 Betway Winter Derby for boss John Gosden.

Dubai Warrior is scheduled to join stablemate and last year's runner-up Court House in the 1m2f contest, and he is generally 9-4 second favourite behind Winter Derby Trial winner Bangkok.

Dubai Warrior registered his most significant success to date when landing the Listed Quebec Stakes over the Winter Derby course and distance in December.

Gosden, who is chasing his second successive Winter Derby following the victory of Wissahickon a year ago, said: "Frankie came in and sat on Dubai Warrior in some work at the weekend and they went nicely. Dubai Warrior is a course-and-distance winner and we also plan to run Court House, who certainly knows his way around Lingfield."

Dan Skelton's Very First Time, who is taking a big step up in trip having scored over three miles at Doncaster last month, is disputing favouritism at 6-1 with Petite Power.

Very First Time had previously finished fourth to fellow entry Hugo N'Taz at Market Rasen on December 26 and the latter is also prominent in the market at 7-1.

Erick Le Rouge is also entered in the 888Sport Pendil Novices' Chase, one of four Grade 2's on Saturday's Kempton card following the addition of the rescheduled Kingwell Hurdle, which was part of last Saturday's cancelled card at Wincanton.

Paul Nicholls has won the Pendil six times in the last ten years, including with Frodon (2017) and Cyrname (2018), and could be represented by Master Tommytucker, Grand Sancy and Southfield Stone. Grade 1-winning novice hurdler Reserve Tank also features among the 13 entries.

The 888Sport Take 'Em On Adonis Juvenile Hurdle is the last recognised trial for the JCB Triumph Hurdle and has also attracted 13 entries, including the unbeaten pair of Nanabelle and Fujimoto Flyer.

Nanabelle could also step out of juvenile company in the Grade 2 Sky Bet Dovecote Novices' Hurdle, where her stablemate Buzz and Tolworth Hurdle third Son Of Camas form a strong entry for Nicky Henderson.

FIRST PUBLISHED 4:15PM, FEB 17 2020
Frankie came in and sat on Dubai Warrior in some work at the weekend and they went nicely

How did she do it before? Looking back on Enable's previous Arc preparations Title chaser William Buick loses appeal against two-day ban for careless riding Funeral details for Sergeant Cecil's owner-breeder Don Hazzard