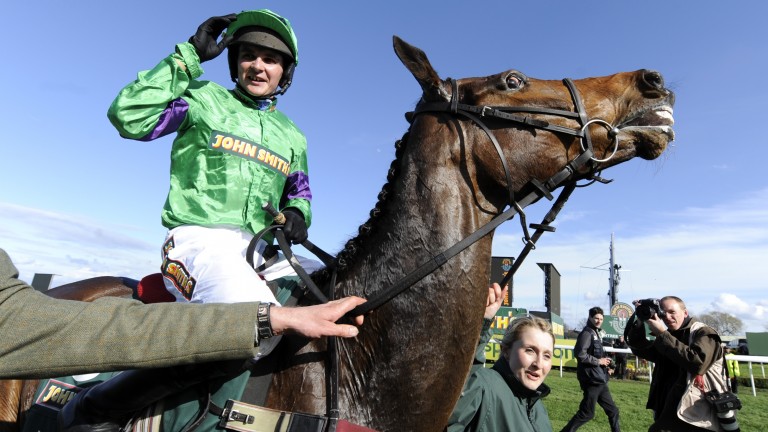 Grand National-winning jockey Liam Treadwell has died at the age of 34.

Treadwell's biggest moment in the saddle came at Aintree in 2009 when partnering 100-1 shot Mon Mome to victory for Venetia Williams.

Treadwell rode nearly 300 winners during the first phase of his career, but decided to retire in February 2018, citing a fall at Bangor in March 2016, which knocked him unconscious, as the primary reason behind the decision.

However, after spending nearly a year working as head lad for Ed de Giles, Treadwell returned to race-riding last year and rode ten winners during the 2019-20 season, all for Alastair Ralph for whom he was assistant trainer.

Ralph said on Tuesday: "Liam was a great person, a great friend. It's a terrible shame. He'd been with me for a season as my assistant trainer and still rode. We had a great season together.

"It's very sad. I have never met anybody who had a bad word to say about him."

Terrible hearing the shocking news about Liam Treadwell. A kind, warm hearted man who I enjoyed having round Warren chase for the short spell he spent with us. May his mind now be at peace. Sleep well x

Venetia Williams and Liam Treadwell enjoyed 125 winners over jumps and the Herefordshire trainer was deeply saddened by Treadwell's death.

Williams said: “It’s such a shock. It’s so incredibly sad. He was part of the family here for many years. He and I shared probably the best day of our lives together when Mon Mome won the Grand National.

“He was not only a wonderful jockey, he was one of the loveliest people you could ever wish to find.”

I’ve know Liam Treadwell for 13 years and he was simply one of the kindest most sincere person I’ve ever had the honour of meeting just a huge loss to all of us that had the pleasure of knowing the great man, I’m heartbroken #Treaders

Treadwell was stable jockey for Nick Gifford for two seasons and they teamed up for 45 winners over jumps – a tally only second to Williams. Gifford described Treadwell as a "brilliant horseman" when paying tribute to the rider.

Gifford said: “Liam was the nicest bloke you’re ever likely to meet. We struck up a chord early on. As an individual he was very kind and thoughtful - there was not a bad bone in his body.

“He was a brilliant horseman too. It was pretty distressing when I took the call this morning. All the staff here loved him. He was great with the owners.

“We go back a long way. His mum and dad were at John Dunlop’s just down the road when I was training point-to-pointers.

“They asked me if Liam, who was 16 at the time, could ride one. I had a seasoned handicapper running in a point-to-point at Charing.

“I told the owners ‘I’ve got this young lad, and I’d love to give him a spin’. He was eight and a half stone wet-through. I remember carrying two saddlecloths full and a heavy saddle. I nearly collapsed afterwards!

“He finished second – just beaten in a photo-finish – but he went on to ride many for me under rules. He rode some nice winners for me and we had some great times.”

Totally shocked and devastated to hear of the passing of Liam Treadwell . All our thoughts with his family and friends . So proud that we were lucky enough to have Liam as a key part of our team in the early days . RIP we will never forget you x A true gentleman. pic.twitter.com/cax304UoZf

Treadwell began his career as an apprentice for Amanda Perrett then moved up north to be based with Dandy Nicholls. He rode 28 winners on the Flat in Britain and switched codes to join Williams as a conditional rider in 2004.

He enjoyed 308 winners over jumps from 2005 to this year, notably Cheltenham Festival success in the Byrne Group Plate Handicap Chase aboard Carrickboy in 2013.

Treadwell's other big-race wins for Williams included in the Grand Sefton on Bennys Mist, Rehearsal Chase aboard Otago Trail and a Grade 2 win in the Supreme Trial at Haydock on Aso.

I am desperately sad to hear of the death of Liam Treadwell. My heart goes out to his family and all his friends. He was the loveliest guy with a great sense of humour and I know how much @IJF_official has supported him in recent years. It is a tragedy to have lost him so young.

BHA chief executive Nick Rust said in a statement: "We are devastated to hear the tragic news about Liam Treadwell.

"Liam had a fine career in British racing, riding over 300 winners in the 17 years he held a jockeys' licence, obviously none more memorable than his remarkable 100-1 Grand National success on Mon Mome in 2009 – a ride that cemented his place in racing folklore.

"The racing community will be united in grief today, and the thoughts of everyone at the BHA are with Liam's friends, family and colleagues."

The Injured Jockeys Fund (IJF) issued a statement on behalf of Treadwell's parents Mark and Lorraine and his brother Nathan.

It read: “We are heartbroken that this has happened. We ask kindly that everyone respects our privacy in the coming days so that we can begin to come to terms with our loss.”

The Professional Jockeys Association and IJF published the following statement: “We were heartbroken to be informed this morning that one of our own, Liam Treadwell, has died. Tributes to Liam have rightly flowed in given how universally popular, well-liked and respected he was, and the weighing room will be a lesser place for his absence.

“Liam will forever be remembered for winning the Grand National in 2009 on the 100-1 shot Mon Mome, trained by Venetia Williams. He was a gifted horseman, valued by racehorse trainers for both this and his communication skills. He was polite, funny, kind and brave, having spoken passionately and eloquently about his mental health issues both in the press but also in our own ‘Jockey Matters’ films. It is devastating that this has happened, and our thoughts are prayers and with Liam’s family, friends and everyone who knew and supported him.

“Help and support is available for anyone who has been affected by this tragic news or is struggling with any mental wellbeing issue. PJA members past and present can obtain support through the PJA or the IJF. They or someone they know can either speak to the PJA or IJF or they can contact the PJA’s provider of counselling services, Sporting Chance directly on the 0778 000 8877, which is manned 24-7. The PJA will fund any support required.”

Upon the news of Treadwell's death, a statement from West Mercia police said: "Earlier this morning police were called to an address in Billingsley near Bridgnorth following the death of a man in his 30s. The death is currently being treated as unexplained. However at this stage there is believed to be no third-party involvement."

FIRST PUBLISHED 1:34PM, JUN 23 2020
He was not only a wonderful jockey, he was one of the loveliest people you could ever wish to find