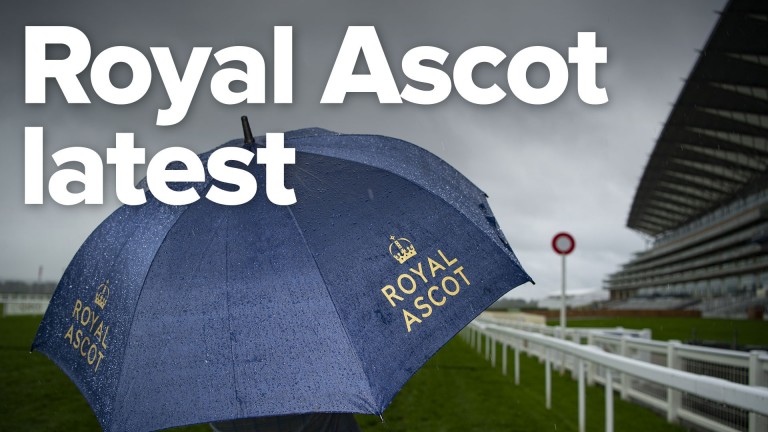 Your one-stop shop for Royal Ascot news on Friday

The fourth day of Royal Ascot 2021 will go ahead as planned after the track passed its inspection following a deluge of rain overnight and on Friday morning.

Officials had called an inspection at 12.45pm as 26mm of rainfall hit the Berkshire track between the end of racing on Thursday and 11am on Friday, which left false patches of ground and areas of concern on the hill and on the home turn, with the going described as soft, heavy in places.

Despite more heavy rain and a lengthy inspection which included course officials, BHA representatives, trainers Aidan O'Brien, Ralph Beckett and jockeys Frankie Dettori and Oisin Murphy, a decision was made that the course was fit for racing.

Ryan Moore was among the jockeys to have walked the track and told the Racing Post: "It's okay. I've ridden in a lot worse." 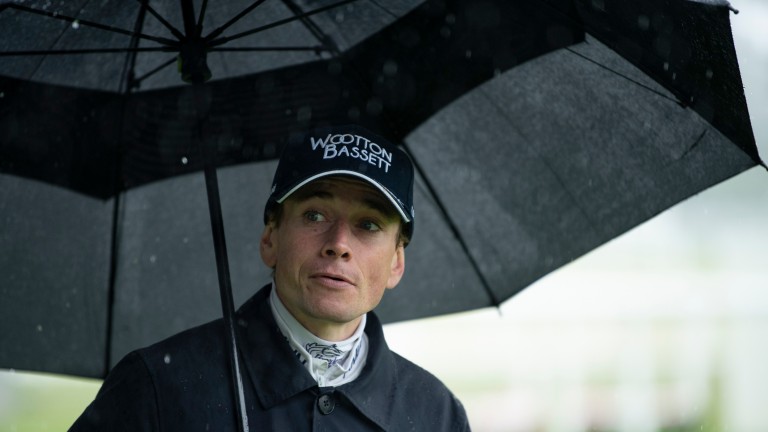 Jockey Ryan Moore out on the track at Royal Ascot: "It's okay. I've ridden in a lot worse"
Edward Whitaker (racingpost.com/photos)

Concerns had been raised about the round course, however the three races staged on that track – the Coronation Stakes, the King Edward VII Stakes and Duke of Edinburgh Stakes – will all be staged on their traditional tracks.

Rails on the round course have been realigned to avoid the worst of the ground, while the stalls will also be moved away from the used ground too.

A BHA spokesperson added: "They've dolled the rail out going down into Swinley Bottom and the rail is out on the home bend to get them off the used ground.

"The stalls will be middle or far side so the 'Willie Carson route' under the trees will be in play for the Coronation, as that's all fresh ground that's rarely used. Hopefully this will save some of the ground that they will be using on the round course tomorrow.

"It's patchy, which is natural with the hoof prints, but it's safe and there's a bottom to the ground everywhere."

Beckett said on ITV Racing: "It's pretty soft, but it's safe and it'll be fine. They'll keep talking to the jockeys through the day, but if I was a betting man I'd bet on us getting through the card."

The dramatic change in going conditions has already had a significant effect at the royal meeting as a trio of leading contenders have been ruled out of the Group 1s on the card.

The most notable absentee is the Ed Walker-trained Primo Bacio, who has been taken out of the Coronation Stakes (4.20), for which she was a general 6-1 chance.

The daughter of Awtaad was an impressive winner of a Listed contest on good ground at York last time and was the leading British candidate in the mile Group 1, but will not take her chance due to the going.

Supremacy had been one of the leading contenders for the 6f Group 1 following his prolific juvenile campaign and despite disappointing in the Pavilion Stakes over course and distance on his reappearance, he was a leading fancy to provide Cox and jockey Adam Kirby with successive victories in the contest.

However, neither he nor stablemate Diligent Harry – an impressive winner on All-Weather Championships Finals Day – will take their chance due to the going. Saint Lawrence was also taken out of the race because of lameness.

Overall, five runners have been taken out of the Commonwealth Cup, while seven have been scratched from the Sandringham Stakes (5.00).

Get It – also trained by Cox – has been withdrawn from the concluding Palace Of Holyroodhouse Stakes (6.10) on account of the going as has Pirate King, who was a 33-1 outsider in the Duke of Edinburgh Stakes (5.35).

However, the Albany Stakes favourite Flotus will take her chance in the 6f Group 3 despite the saturated conditions.

Joint-trained Ed Crisford said: "I do think she is a quicker ground filly, and I was excited to see her on it, but she won on soft ground at Goodwood and has a favourite’s chance."

The sustained market support for Belloccio has continued into Friday, with the three-year-old now as short as 17-2 in places for Group 2 glory in the King Edward VII Stakes (3.05).

The David Menuisier-trained son of Belardo was a Listed winner as a juvenile but has been well beaten in two starts this season when behind market leader Alenquer in the Sandown Classic Trial before finishing eighth in the Dante Stakes.

However, having proven form on soft ground, he has been well supported into single-figure prices in places having been as big as 22-1 on Thursday. Gear Up has also been well backed in the 1m4f Group 2 and is now 9-1 (from 12) with Paddy Power.

Novemba, an easy winner of the German 1,000 Guineas last time, has also been a big market mover in the Coronation Stakes having been a general 9-1 overnight.

The Peter Schiergen-trained daughter of Gleneagles is now as short as 5-1 following the withdrawal of Primo Bacio.

Irish 1,000 Guineas winner Empress Josephine has also been subject to market support and is now a 9-2 chance (from 7) with Paddy Power.

Who is Frankie Dettori riding on day four at Royal Ascot on Friday?

Top stories: Subjectivist stays best of all to down Stradivarius

Subjectivist provided Mark Johnston with a fourth success in the Gold Cup as he powered to glory in the marathon contest in which Stradivarius could finish only fourth.

The four-year-old was a five-length winner of the 2m4f Group 1 to provide Joe Fanning with a landmark success and deny Stradivarius in emulating Yeats by winning four straight Gold Cups.

English and Irish 1,000 Guineas winners Mother Earth and Empress Josephine are the star names on show on day four as they clash in the Coronation Stakes (4.20).

Friday evening's fixture at Goodwood has also been cancelled after the track was left waterlogged following the heavy rain.

The Sussex track was due to stage a seven-race card beginning at 5.40pm, but officials made the decision to call off the meeting before the 12.30pm inspection.

FIRST PUBLISHED 8:08AM, JUN 18 2021
They'll keep talking to the jockeys through the day, but if I was a betting man I'd bet on us getting through the card