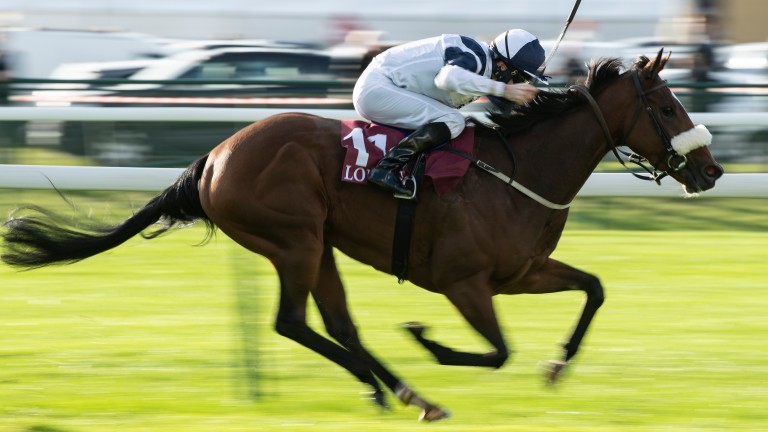 Glass Slippers: will not run in the King's Stand Stakes
Edward Whitaker (racingpost.com/photos)
1 of 1
By James Stevens UPDATED 4:38PM, JUN 9 2021

Glass Slippers will not take on Battaash in Tuesday's King's Stand Stakes, with connections instead looking to test her over six furlongs in the Diamond Jubilee Stakes later in Royal Ascot week.

She was not among the 16 confirmations for the middle of the three Group 1 races on the first day of the meeting on Tuesday. She was around a 4-1 chance in the race she finished fifth in last season, and Battaash is now 6-4 (from 2-1) with Coral to repeat last year's success.

Instead, the Kevin Ryan-trained Glass Slippers will be tested at six furlongs for the first time since August 2019 and she is a general 8-1 chance for her new target. The five-year-old has not been seen since her brilliant victory in the Breeders' Cup Turf Sprint in November.

Adam Ryan, assistant and son to Kevin, said: "It was always the plan to try her at six furlongs at some point this year. She's done well over the winter, she looks like she's thrived."

On Tuesday, Battaash, who is set for his first start of the season at the royal meeting, could still have to overcome classy sprinters Oxted and Winter Power, who remain in the race.

Elsewhere in the St James's Palace Stakes (4.20), a busy campaign for Poetic Flare shows no signs of slowing down as the 2,000 Guineas winner is one of 15 on course to run in the Group 1 mile contest.

The Jim Bolger-trained three-year-old, who also ran in the French and Irish 2,000 Guineas, could feature among a strong Irish contingent including Lucky Vega, Thunder Moon, Wembley and Battleground. Sunday's French Derby winner St Mark's Basilica was taken out of the race as expected.

Of the home challenge, Mostahdaf and Chindit are still engaged, as are Godolphin pair Highland Avenue and La Barrosa, who are set to be ridden by retained jockeys William Buick and James Doyle.

The Revenant, who was as short as 8-1 for the opening Queen Anne Stakes (2.30), was scratched on Wednesday.

Red-hot favourite Palace Pier was one of 12 left in at the confirmation stage, with the John and Thady Gosden-trained four-year-old an odds-on shot for the Group 1 prize.

His biggest threat, the Aidan O'Brien-trained Breeders' Cup Mile winner Order Of Australia, is still engaged in the race.

The Wesley Ward-trained Kaufymaker was the sole filly among 29 left in the Coventry Stakes (3.05), while Dettori was confirmed to ride last month's Yarmouth winner Tolstoy.

In the Ascot Stakes (5.00), Willie Mullins has secured the services of Moore to ride Rayapour. The five-year-old has raced only once for the stable, finishing third in a maiden hurdle at Kilbeggan.

FIRST PUBLISHED 1:51PM, JUN 9 2021
The Kevin Ryan-trained mare, who was rated a 4-1 chance, has not been seen since her brilliant victory in the Breeders' Cup Turf Sprint in November

Who is better - Hurricane Lane or Adayar? Our experts have their say Zain Claudette holds on to provide Ray Dawson with emotional first Group win Thady Gosden can't see a handicapper beaten at Ascot English tracks prepared for return of bumper crowds after easing of restrictions 2021 King George: Aidan O'Brien on Love's chances in Saturday's Group 1 at Ascot Punters getting 'stuck into' Wonderful Tonight as storms threaten King George