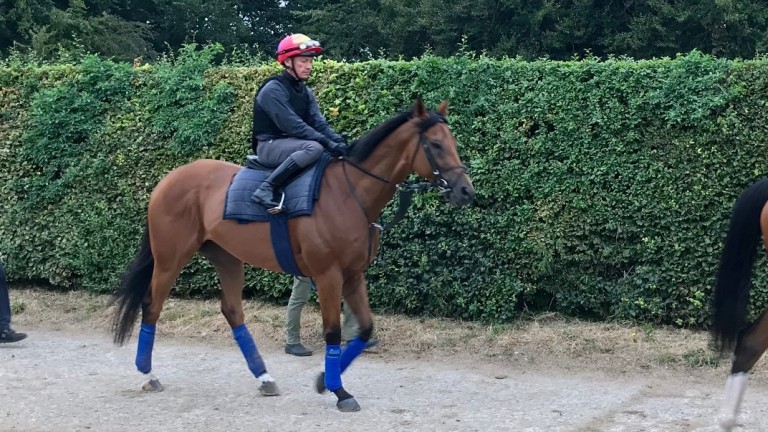 Lord North and Frankie Dettori head to the Al Bahathri on Thursday morning
1 of 1
By David Milnes UPDATED 3:24PM, AUG 13 2020

Frankie Dettori will partner Lord North when he chases a record-breaking sixth win in the Group 1 Juddmonte International at York on Wednesday.

The Italian jockey, who put the Royal Ascot winner through his final piece of serious preparation on Newmarket Heath on Thursday morning, had a rear view of the James Doyle-ridden Lord North in the Group 1 Prince of Wales's Stakes when he partnered stablemate Mehdaayih, who finished sixth of seven.

A best-priced 7-2 chance with Paddy Power and Betfair Sportsbook for his Knavesmire showdown with Coral-Eclipse winner Ghaiyyath, Lord North sailed through his final prep over a mile on the Al Bahathri Polytrack where he put plenty of daylight between himself and useful handicapper Humanitarian.

Dettori, currently tied with the legendary Lester Piggott on five Juddmonte International wins, has ridden Lord North only twice before, most notably when partnering the four-year-old to victory in last year's Cambridgeshire, with the son of Dubawi ridden by Robert Havlin on his narrow comeback win in the Group 3 Brigadier Gerard Stakes at Haydock in June.

As he has not run for nearly two months, Lord North will be fresher than most at York, for a race John Gosden won two years ago with Roaring Lion.

The Ebor festival 2020: all you need to know for York's showpiece meeting

The champion trainer said: "Lord North worked nicely this morning under Frankie and it has been the plan since Royal Ascot to point him at York.

"It looks a quality race, as it always is, especially with Ghaiyyath in there who we know all about. He's a fresh horse having not run since June and he should enjoy the track."

Lord North will likely face a field of top-class rivals in the Juddmonte International, with star names including Ghaiyyath, Kameko and Palace Pier also entered for the £250,000 showpiece.

Aidan O'Brien is responsible for six of the 14 entries for the Group 1, with his battalion headed by superstar mare Magical, Japan and last season's Derby hero Anthony Van Dyke.

Also entered is the Roger Charlton-trained Aspatar, who will look to follow up his recent course-and-distance success in the York Stakes now upped into Group 1 company.

A maximum field of 14 could run in the Group 2 Great Volitgeur Stakes, with unbeaten John Gosden-trained Darian on course for his biggest test to date.

Mogul, who won the Gordon Stakes at Goodwood when last seen, is also entered, as is Royal Ascot winner Pyledriver, who is looking to bouce back from a below-par effort in the Derby last time.

Big-race blow: Ebor favourite Hamish out for the season after sustaining injury

Aspetar set to take his chance in red-hot Juddmonte International

FIRST PUBLISHED 11:20AM, AUG 13 2020
Lord North worked nicely this morning under Frankie and it has been the plan since Royal Ascot to point him at York