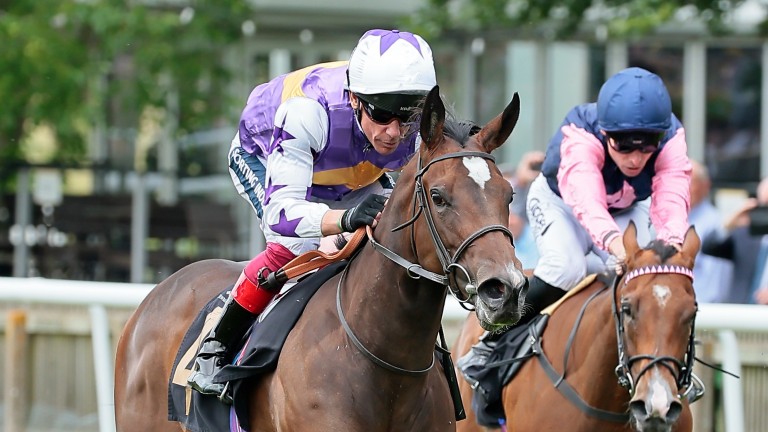 Lezoo: will be reunited with Frankie Dettori in the Duchess of Cambridge Stakes at Newmarket on Friday
Mark Cranham
1 of 1
By Jack Haynes 4:30PM, JUL 4 2022

Frankie Dettori will head to Kempton for one ride on Wednesday evening, continuing his association with owner Marc Chan prior to being reunited with Lezoo in the Duchess of Cambridge Stakes on Friday.

Dettori was successful on Lezoo in the Listed Maureen Brittain Memorial Empress Stakes at Newmarket on June 25 on his sole mount in Britain since his sabbatical with John and Thady Gosden was announced in the aftermath of Royal Ascot.

He rode at Hamburg on Sunday, finishing a close third in the German Derby and second in a Group 3, and partners the once-raced Apache Spark in the 6f fillies’ novice at the Sunbury track.

The Ralph Beckett-trained juvenile was a beaten favourite when fifth on debut at Salisbury last month.

Dettori boasts a 25 per cent strike-rate (5-20) at Kempton in the last five years, finishing second on two of his three rides at the track this year.

Jamie McCalmont, bloodstock agent and racing manager to Chan, said: “Frankie called up for the ride on Wednesday – I wouldn’t ask him to go to Kempton to ride a second-time starter but he was keen to take the ride. It looks a hot race and she was a little disappointing first time out. It might be a big ask to beat the George Boughey filly [Kinta] but we expect a better run on the back of her debut.”

Lezoo’s course-and-distance winning form will be an asset in Friday’s Group 2 event at Newmarket, for which she is 4-1 ante-post co-favourite alongside Albany Stakes runner-up Mawj and Queen Mary second Maylandsea.

She is the second horse owned in partnership by Chan and Andrew Rosen following on from Qipco 1,000 Guineas second Prosperous Voyage.

McCalmont said: “Lezoo was kind of swallowed up in the other point of attraction on the day last time! She’s done everything right and it’s always a good feeling when your clients own a horse that is unbeaten.

“Prosperous Voyage is the only other horse Marc and Andrew have together, so it’s fair to say it’s been fun so far.”

Prosperous Voyage, who finished tenth in the Coronation Stakes at Royal Ascot, has the option of the Listed Edmondson Hall Solicitors Sir Henry Cecil Stakes at Newmarket on Thursday, for which Dettori is jocked up, or the Group 1 Tattersalls Falmouth Stakes on Friday.

If contesting the top-level event, she would be taking on Coronation Stakes scorer Inspiral – the regular mount of Dettori – for a fourth time having finished second to her in the May Hill Stakes and Fillies’ Mile last year.

He is also booked for the Chan-owned New Mandate in Thursday’s Princess of Wales’s Close Brothers Stakes at Newmarket, with Gosden suggesting on Saturday that Dettori will be also riding for Charlie and Mark Johnston at the July festival before heading to the US for the weekend.

Dettori is set to don the Godolphin silks aboard Derby eighth Nations Pride and Oaks disappointment With The Moonlight in the Belmont Derby and Oaks for Charlie Appleby.

FIRST PUBLISHED 4:30PM, JUL 4 2022
I wouldn’t ask him to go to Kempton to ride a second-time starter but he was keen to take the ride

'She's a true champion' - Inspiral and Dettori bounce back to Group 1 glory 'I am delighted to win one' - Dettori weighs into team event with a victory 'We have the king and queen' - Dettori receives Verry Elleegant boost 'I am a bit sore, but I was lucky to walk away' - Callan reflects on mixed day 'The carrot was there, so we gave it a go' - Ward thrilled with prize-money 'She can take a big step forward' - our Wednesday tipster has four bets