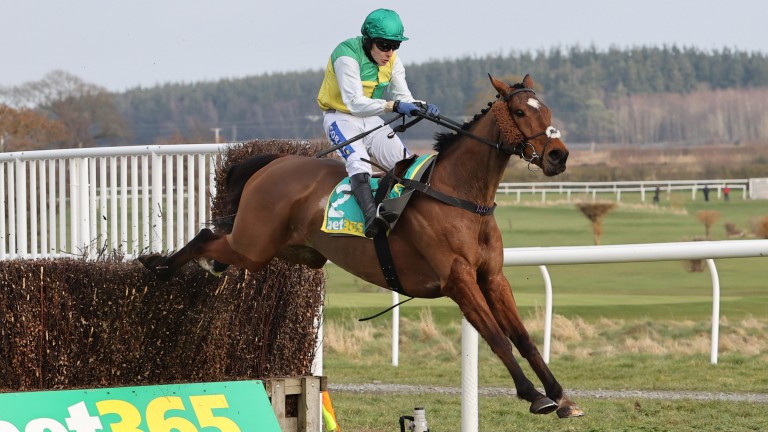 Cloth Cap: entered to defend his title in the Ladbrokes Trophy at Newbury
John Grossick (racingpost.com/photos)
1 of 1
By Catherine Macrae UPDATED 9:56AM, OCT 27 2021

The big jumps races are coming thick and fast andentries have been released for the Ladbrokes Trophy at Newbury on November 27 and the two big handicaps at Cheltenham's November meeting a fortnight earlier. Here are five horses who could lightthem up.

Runner-up to Abacadabras inlast season's Aintree Hurdle, Buzz enjoyed a profitable summer when landing the biggest win of his career in the Cesarewitch on his first Flat start in two years.

The 8-1 victory gave Nicky Henderson a third success in the Newmarket marathon, but the Greatwood Hurdle is a contest he has yet to claim after fielding runners in the last nine renewals of the race.

Henderson has twice claimed second during that time in 2014 and 2012, but will be hoping Buzz can go one better as he drops down in trip from his Newmarket triumph.

It will mark a first Cheltenham appearance for the seven-year-old, whose last win over hurdles came at Ascot in November.

Last year's winner Cloth Cap bids to follow in the footsteps of 12 months ago when he blew his rivals away under Tom Scudamore to win by ten lengths.

The Jonjo O'Neill-trained runner is expected to come on from his first run of the season when fourth at Cheltenham, the same race he finished third in last year before his Newbury romp.

In the colours of the late Trevor Hemmings, Cloth Cap was pulled up in the Grand National this year when sent off 11-2 favourite, but claimed another wide-margin success at Kelso a month before.

Last year's runner-up Aye Right is set to reoppose alongside fourth-placed The Hollow Ginge, who finished ahead of Cloth Cap on Saturday.

Another looking to come on from this first run of the season is Fusil Raffles, who was unable to make an impression on favourite Bravemansgame at Newton Abbot this month.

A winner at Cheltenham in December, the Nicky Henderson-trained runner was a game second in the Marsh Novices' Chase but ended last season on a sour note when pulled up in the Manifesto Novices' Chase at Aintree.

The six-year-oldsets off on a bold bid for his first season outside novice company for Simon Munir and Isaac Souede. 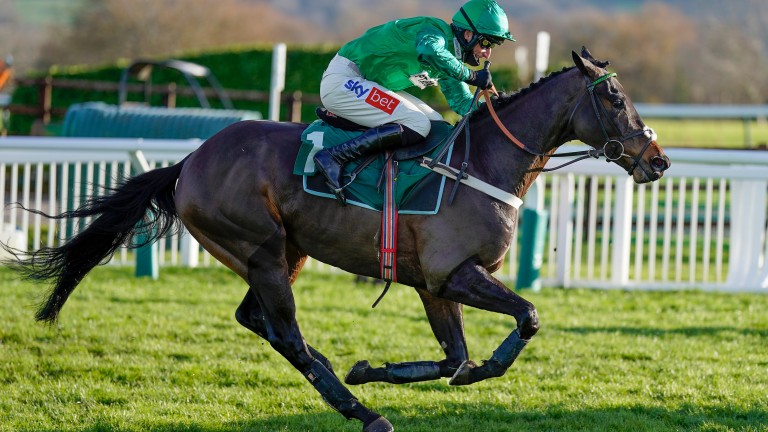 Next Destination had a light campaign last season, running onlyfour times after a 920-day absence from the track since switching to Paul Nicholls from Willie Mullins.

Those three runs produced two firsts and two seconds – all at Grade 2 level– including victory over Fiddlerontheroof, who is also entered in the 3m2f Newbury chase.

The nine-year-old was second on his last start in March at Cheltenham to Galvin, who is set to run in the Ladbrokes Champion Chase at Down Royal on Saturday.

A winner of three of his five starts last season, Protektorathas entries for both contests.

He claimed Grade 1 success in at Aintree in April after favourite Fusil Raffles was pulled up,storming past two rivals towards the final fence and powering away to win by three and three-quarter lengths.

A first time tongue-tie and recent wind surgery were key to the six-year-old's victory, whose greatestclaim to fameuntil that point was a Listed novice hurdle victory.

FIRST PUBLISHED 8:00AM, OCT 27 2021
Last year's winner Cloth Cap bids to follow in the footsteps of 12 months ago and when he blew his rivals away to win by ten lengths

Join Racing Post Members' Club to unlock exclusive features, news, tips and more No RCA plan to bring in mandatory Covid passes despite Chelmsford move Haydock given green light for Wednesday's card after 'dramatic change overnight' Tylicki recalls 'shout for survival' as claim against Gibbons is heard in court Dan Skelton alleges 'campaign' against him in argument over £42,000 payment After months of comment, Bryony Frost-Robbie Dunne case finally set to be heard