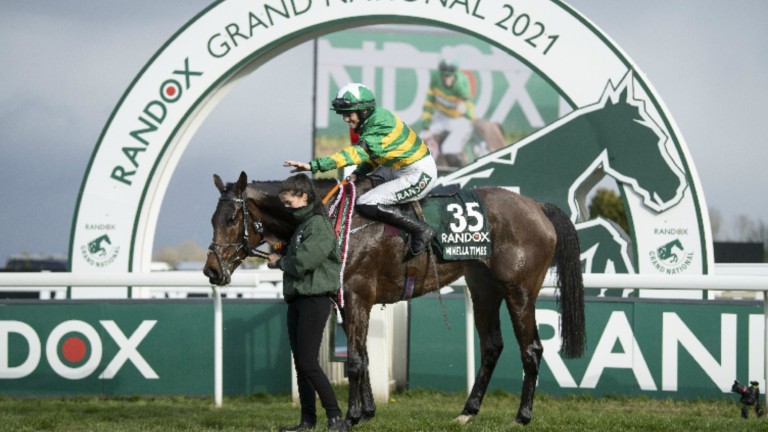 The overround for Saturday's Randox Grand National dipped to its lowest for 16 years, which one leading bookmaker said highlighted how well the off-course system of returning starting prices was working.

Starting prices have traditionally been formed by on-course layers, but they have been all but absent for the last year as racing has largely taken place behind closed doors because of the coronavirus pandemic.

Following Rachael Blackmore's history-making triumph on Minella Times, a 146 per cent overround was returned, the lowest since 2005, when a figure of 140 was produced after Hedgehunter's victory.

Criticism followed the 2015 National, which was won by Many Clouds and yielded an overround – the notional profit margin built into the collective odds – of 165, while it was 163 for Tiger Roll's second success in the race in 2019.

Simon Clare, Ladbrokes Coral PR director, said: "We priced the race just as we would any other, reflecting our trading position, and the fact the current starting price mechanism has returned such a competitive and fair overround reflects the fact it is working effectively and fairly for consumers and operators."

The Horseracing Bettors Forum, a body created in 2015 to represent the interests of those who bet on British racing, noted the 146 per cent total and said it "continues to monitor overrounds, [and] where we see an issue we raise any concerns with the Starting Price Regulatory Commission [SPRC] and the Gambling Commission."

It was announced recently by the SPRC that SPs will continue to be determined using mainly remote prices, even when restrictions on crowds are lifted, a move opposed by traditional on-course operators.

An element reflecting their prices will continue to be included in the new SP, the SPRC outlined last month, and it is hoped a mechanism for that will be completed by the time racegoers and bookmakers are allowed back on track, scheduled to be from May 17 in England.

'I had no idea' - trainer in the dark as Call Me Freddie lands massive plunge Henry de Bromhead: Envoi Allen flop was down to a chipped joint Blackmore has chance to cap her sensational spring on Honeysuckle Pertemps winner Mrs Milner out of the Champion Stayers Hurdle Envoi Allen to have CT scan after injury to hind joint in Punchestown flop Horse Racing Ireland announces extended break for Irish jump jockeys in June