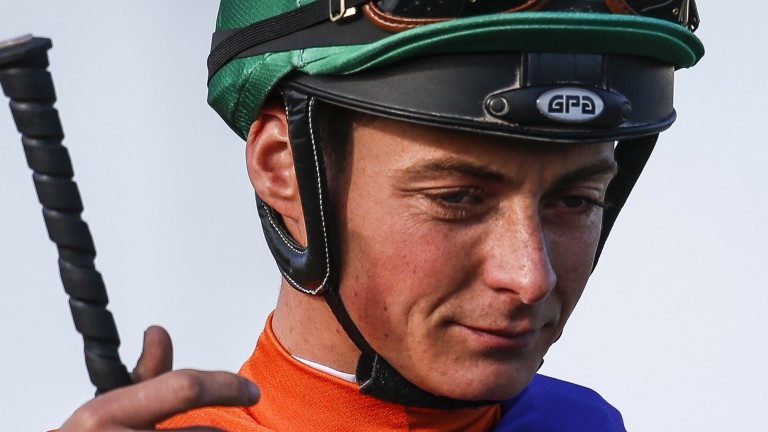 Flat jockey Eoin Walsh is facing up to three months out of the saddle after breaking two bones in his back in a horror fall at Chelmsford on Monday evening.

The rider's very first outing in the all blue of Godolphin, aboard the Saeed bin Suroor-trained Nation's Beauty, came to an abrupt end in the opening 1m2f novice when the filly broke a leg and was fatally injured on the home turn.

Walsh was deposited head first into the artificial surface as a result of the fall, which also brought down Ryan Tate, who was following on the Robyn Brisland-trained outsider Norwegian Red.

Walsh was taken to Broomfields Hospital in Chelmsford and kept in overnight after the incident, but the 26-year-old is hoping to be allowed back home to Newmarket later on Tuesday.

Eoin has fractured his Spine in 2 places he is very sore but in good spirits he will be back soon @ChelmsfordCRC @IJF_official pic.twitter.com/hBAqhPmJWe

He said: "Unfortunately I've done [broken] my T6 and T7 vertebrae, and my right elbow has come up like a balloon. My face is also pretty bashed up, which is no surprise as I hit the ground quite hard. They say I could be out for two to three months, but I'm not complaining as it could have been so much worse."

Of the incident, which occurred three furlongs out in a race won by odds-on favourite Tarroob, Walsh said: "It all happened so quick as she went down immediately and I was knocked out for a while.

"It was frustrating as it was my first ride for Godolphin and I was going well at the time. I'm not saying I was definitely going to win, but I would have given Tarroob plenty to think about."

Before his fall, Walsh had been on target to beat his previous best annual tally of 21 winners. He said: "I had 19, plus one bumper win, to my name and it had been going well thanks to Roger Varian, who I ride out for. Maybe I can try again next year."

Tate, who walked away after being unshipped from Norwegian Red, took himself to hospital on Tuesday morning and is facing a short spell on the sidelines after x-rays revealed a fracture to a small bone in his ankle.

'I had 50 stitches in my face': Danny Cook ruled out of quick return from injury

FIRST PUBLISHED 1:50PM, NOV 24 2020
It was frustrating as it was my first ride for Godolphin and I was going well at the time