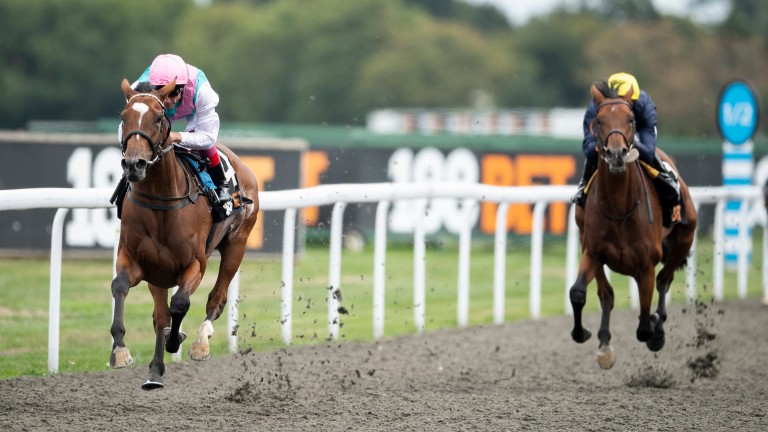 Enable proved far too good for a penalised Crystal Ocean in the 2018 September Stakes
Edward Whitaker
1 of 1
By Scott Burton UPDATED 8:29PM, AUG 31 2020

Enable looks unlikely to face anything like the calibre of opposition she encountered in the September Stakes two years ago when she heads back to Kempton on Saturday for her final prep ahead of a historic fourth crack at the Qatar Prix de l'Arc de Triomphe.

When nine entries were revealed on Monday the presence of stablemate and companion-in-colours Logician in the list raised a few pulses, but last season's St Leger hero will not make his belated seasonal reappearance in the Unibet-sponsored Group 3.

Logician was unbeaten in five starts at three but has not been sighted since storming to success at Doncaster almost a year ago. However, Khalid Abdullah's racing manager, Teddy Grimthorpe, scotched any prospect of Logician facing Enable at Kempton.

"They won't both run and Logician has just been put in there as a precaution," said Grimthorpe.

Logician: entered in the September Stakes only 'as a precaution'
Martin Lynch

While the wait goes on for Logician's return, it is all systems go for Enable, who took in the September Stakes after a rushed preparation for her second Arc victory in 2018, on which occasion she had Crystal Ocean to overcome.

While Enable will be the one conceding a penalty this time, with Logician a doubtful runner, her next highest-rated opponent is likely to be Prince of Arran, who is rated 15lb inferior to the 11-time Group 1 winner.

Grimthorpe said: "It's a nice continuation for Enable following on from the King George and it's then good timing until the Arc. She's in good form from that point of view."

Last October Enable became just the second horse in the 99-year history of the Arc to even attempt a third success, only to be denied by Waldgeist.

John Gosden has campaigned her ever since with the sole aim of securing that record-breaking third victory in Europe's premier all-aged middle distance prize and, at the age of six, she would become the second oldest Arc winner behind Motrico (1932) in the season the race celebrates its centenary.

Six-year-olds in the Arc

It is rare for top-class horses to still be in training at six and of the 22 horses of that age or older to line up in the Arc since 1980, only six had any realistic chance. 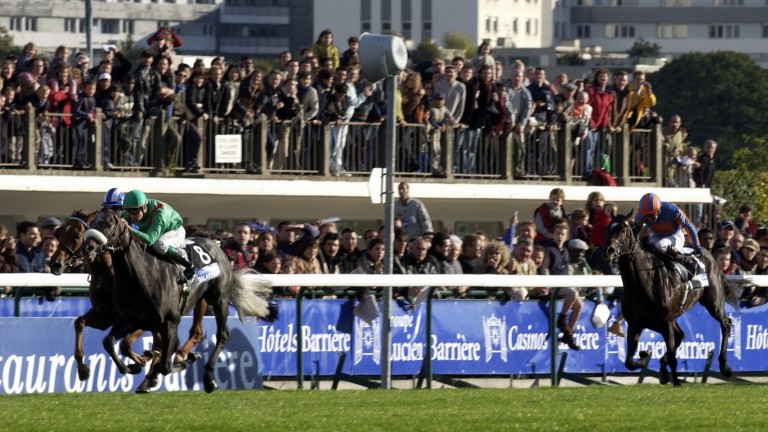 But for the brilliance of Dalakhani, six-year-old Mubtaker (far side, striped cap) would have been a wide-margin winner of the 2003 Prix de l'Arc de Triomphe
Edward Whitaker

Aside from seeing Enable in action on a British racecourse for what could be the last time, the race looks likely to have a bearing on the Melbourne Cup, with Prince Of Arran set to have his final start before heading to quarantine.

Also featuring among the entries are two horses in the ownership of Australian Bloodstock – who tasted success at Flemington in 2014 with the Ryan Moore-partnered Protectionist – in Almania for David Simcock, and the David O'Meara-trained Tinandali.

Discussing Almania, syndicate manager Jamie Lovett told Racing.com: "He'll run against Enable, so we're hoping for a small field. It’s a Group 3 on the all-weather, so Enable usually does the Winx thing over there and scares them all off; so we just need to run top three to qualify [for the Melbourne Cup]. The plan is to run against her and hopefully run a place."

FIRST PUBLISHED 5:25PM, AUG 31 2020
It's a nice continuation for Enable following on from the King George and it's then good timing until the Arc.