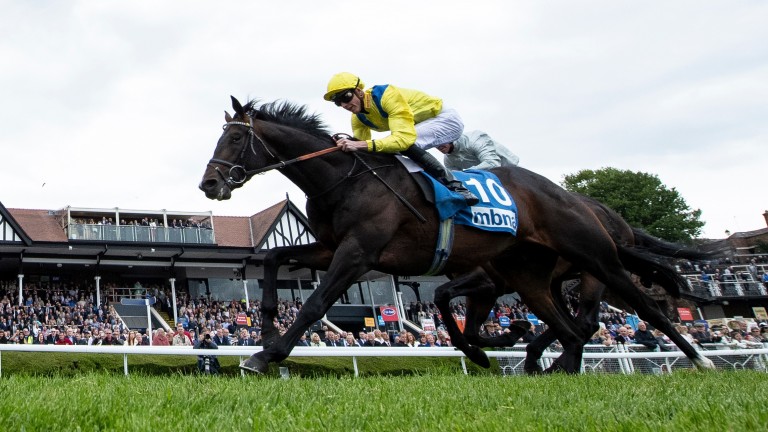 Young Rascal beats Dee Ex Bee in the Chester Vase
Edward Whitaker (racingpost.com/photos)
1 of 1
By Jon Lees UPDATED 6:43AM, MAY 30 2018

Under his Godolphin retainer Doyle could have been claimed for 33-1 chance Dee Ex Bee, who is owned by Sheikh Hamdan bin Mohammed Al Maktoum, son of Sheikh Mohammed.

But Dee Ex Bee's trainer Mark Johnston revealed on Monday that a resolution had been found that suited all parties, allowing Doyle to stick with the colt he rode to a half-length victory over Dee Ex Bee in the Chester Vase.

"Sheikh Hamdan Bin Mohammed let James off on the basis that he had the opportunity to have a ride on the horse who beat us at Chester," revealed Johnston.

"James hasn't actually won on Dee Ex Bee whereas Silvestre has. Although he's ridden him twice, that has been in two of his more disappointing runs, so he doesn't have quite the same credentials for the horse that Silvestre has.

"James accepted he would ride Dee Ex Bee if that's what the owner wanted, but this suited everybody. Nobody is losing out."

Young Rascal, who is owned by Investec managing director Bernard Kantor and a general 10-1 shot for the Derby, is unbeaten this year under Doyle, who also exercised the colt during a visit to Epsom last week for Breakfast with the Stars.

Haggas said: "I'm pleased about the situation. James has ridden the horse twice this year. He likes him, so it's great news he's able to ride and I'm very grateful to all the connections of Dee Ex Bee to allow it to happen."

Of Investec Oaks entry Sea Of Class, Haggas added: "I'll decide on Wednesday morning and not before."

Dee Ex Bee will be only horse in the Derby with winning form at Epsom and, despite his odds, is fancied to turn the tables on Young Rascal by Johnston.

"He knows the track and is no forlorn hope," said the trainer. "I think we're in a nice position in that we've got a live outsider that's not on the radar. We'd fancy our chances of beating William Haggas's horse with another two furlongs, even at Chester."

There were 14 left in the £1.5 million race on Monday, with favourite Saxon Warrior one of seven trained by Aidan O'Brien, who also still has Delano Roosevelt, Kew Gardens, The Pentagon, Nelson, Rostropovich and Zabriskie in the reckoning.

The ground at Epsom on Monday afternoon was changed to good, good to soft in places, from good to soft, though there was a risk of showers overnight.

FIRST PUBLISHED 11:25AM, MAY 28 2018
James accepted he would ride Dee Ex Bee if that's what the owner wanted but this suited everybody. Nobody is losing out