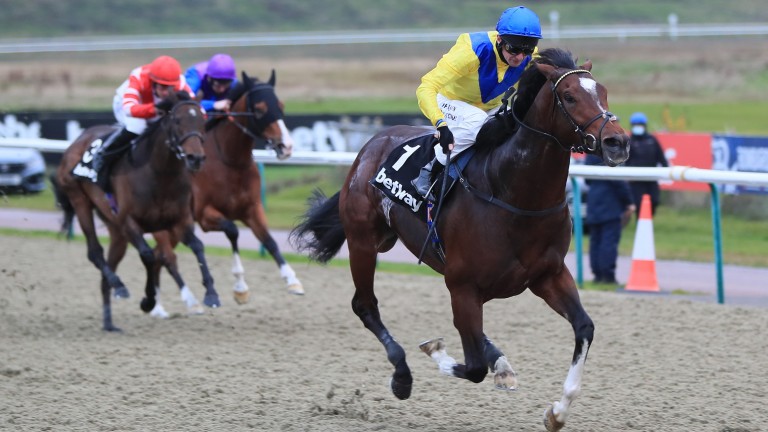 The John Gosden-trained Dubai Warrior, a classy all-weather performer, is to fly out to Dubai in the coming days for an ambitious tilt at the Al Maktoum Challenge Round 1 at Meydan on January 21

Last year's Group 3 Winter Derby winner will be heading into unknown territory as the Group 2 contest, run over a mile, is staged on dirt.

Although he has no experience of dirt, Sheikh Mohammed Bin Khalifa Al Maktoum's Dubai Warrior has won six of his eight starts on the all-weather, most notably when overcoming stablemate Court House to land the Winter Derby last February.

This winter, Dubai Warrior was earmarked for a tilt at the Saudi Cup in Riyadh in February after winning the Listed Churchill Stakes at Lingfield in November, and that race could still be on his agenda.

Gosden said: "Dubai Warrior worked nicely on the Al Bahathri Polytrack on Saturday morning and the plan is for him to fly out to Meydan on Thursday.

"Round 1 of the Maktoum Challenge is staged on dirt, which will be new to him but there's no reason why he shouldn't handle it."

Following his victory in the Churchill Stakes, Dubai Warrior was last seen finishing third when failing by a neck to give 3lb to Sangarius in the Listed Quebec Stakes at Lingfield last month.

The winner also holds an entry in the $20 million Saudi Cup, the second running of which is to be staged on February 20.

Fantastic Frankie gets his fractions right aboard Dubai Warrior

FIRST PUBLISHED 1:00PM, JAN 10 2021
Dubai Warrior worked nicely on the Al Bahathri Polytrack on Saturday morning and the plan is for him to fly out to Meydan on Thursday

Dubai option not ruled out for Saudi Cup winner Mishriff