Defying Storm Arwen: 'We had head-torches and got the rest of them all fed' 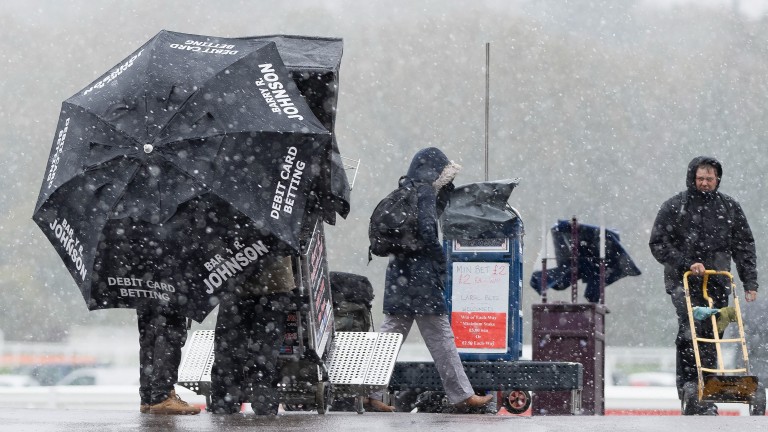 Storm Arwen made life hard at Newbury but it was in the north that high winds and snow really had an impact
Edward Whitaker
1 of 1
By Scott Burton UPDATED 11:56AM, DEC 6 2021

Stable and ground staff had their work cut out to ensure racing went ahead in several locations around Britain on Saturday as Storm Arwen brought high winds and snow, making even getting horses to the track a real challenge in many cases.

The first significant storm of the winter caused chaos across the country, with reports of at least two fatalities due to falling trees and tens of thousands of people left without electricity.

Stuart Coltherd's staff had to resort to torchlight after power lines came down near his base on the outskirts of Selkirk in the Scottish Borders.

"We were up at half four, feeding the horses and the van was away at five o'clock to Doncaster," said Coltherd, whose Cooper's Cross narrowly missed out in a novice chase at Newcastle under son Sam.

"We had head-torches and flashlights and got the rest of them all fed. They say the power won't be back on until eight o'clock this evening at the earliest. It was all hands on deck.

"I've never seen anything like it, it was pretty bad. It's the strongest winds I've seen anyway. I wouldn't want to have been outside in it.

No power and very windy but managed to get horses fed, mucked out and a box on its way to Doncaster Races #StormArwen pic.twitter.com/N5sekIwwn2

Coltherd added: "I didn't think racing would be on, I couldn't see how it would actually take place.

"They've done a great job and it's been a good team effort by everybody to get the show on the road. It was a bit frightening in places, but we got there in the end."

The north-east of England was particularly affected by high winds, with Ann Hamilton having to give second best to the weather and keep stable star Nuts Well at home ahead of the Rehearsal Chase at nearby Newcastle, one of seven non-runners across Britain due to travel problems related to conditions.

Bangor's meeting was cancelled early on Saturday morning due to the aftermath left by Storm Arwen, which made areas for racegoers unsafe and left the racecourse and nearby village with no power.

Clerk of the course Andrew Morris said: "We've got severe damage, it's really left the public areas unsafe. It's not long-term, but there isn't time for us to ensure everything is safe before racing. Public safety is the number one concern and that's why we've unfortunately had to abandon.

"It's one of those freak incidents. It's been an interesting morning for sure with the great British weather."

Who was the most likely Cheltenham Festival winner from today's action?

FIRST PUBLISHED 6:00PM, NOV 27 2021
I've never seen anything like it, it was pretty bad. It's the strongest winds I've seen anyway