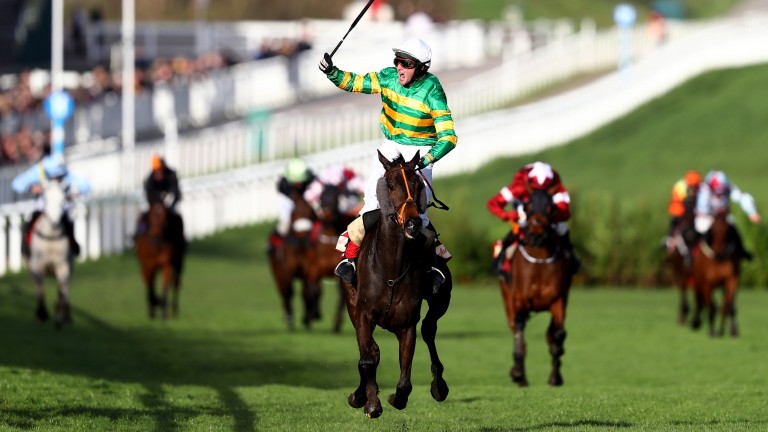 Easysland: hacked up in the cross-country chase at Cheltenham in March
Michael Steele (Getty Images)
1 of 1
By Scott Burton 9:22AM, OCT 15 2020

Easysland is on course to make his seasonal return at Cheltenham next month, but trainer David Cottin already has a crack at the Grand National firmly on the agenda for JP McManus's talented six-year-old.

Easysland defeated dual Aintree hero Tiger Roll by 17 lengths in the Glenfarclas Chase over the Cheltenham cross-country course in March and, while that venue will again play a big role in Cottin's plans for the campaign, the National would be the biggest prize of all.

"Easysland will go straight to Cheltenham for his comeback, where he will have to carry a lot of weight," said Cottin. "He also has the option of the Grand Cross de Compiegne but I would prefer to go to Cheltenham, where he will run at both the November and December meetings.

Cottin added: "We will then have to decide whether to go to the Grand Cross de Pau, because he has an extra race in his programme. We'll have to see whether Pau might be one race too many.

"His two objectives are the Cheltenham Festival in March and the Grand National to follow. We'll see how his first two runs play out and then we'll review things."

Easysland burst on to the British scene when providing Cottin and longtime ally Jonathan Plouganou with a first success at Cheltenham last December, after which he was bought by McManus.

His defeat of Tiger Roll at the festival earned him an official mark of 152 and after just 15 career starts, he is still entitled to be progressing.

Cottin told French racing channel Equidia: "He has strengthened up a lot and his summer holidays have done him the world of good, so I think he'll be better than ever this season."

Cortolvin became the most recent of two Grand National winners to be trained in France way back in 1867.

FIRST PUBLISHED 12:00PM, OCT 15 2020
His two objectives are the Cheltenham Festival in March and the Grand National to follow

Conditions ease but Cheltenham avoids worst of the heavy rain on Wednesday 'He should go very well' - Skelton ready to unleash Grade 1 star at Cheltenham Paul's Saga ends L'Autonomie unbeaten run as Nabet returns to the big time Elliott: if you don't want to be champion trainer, why else would you do it? Cheltenham ready to put on a show as new season dawns despite absence of fans What's on this week: Classic clues at Doncaster as Cheltenham and Aintree return