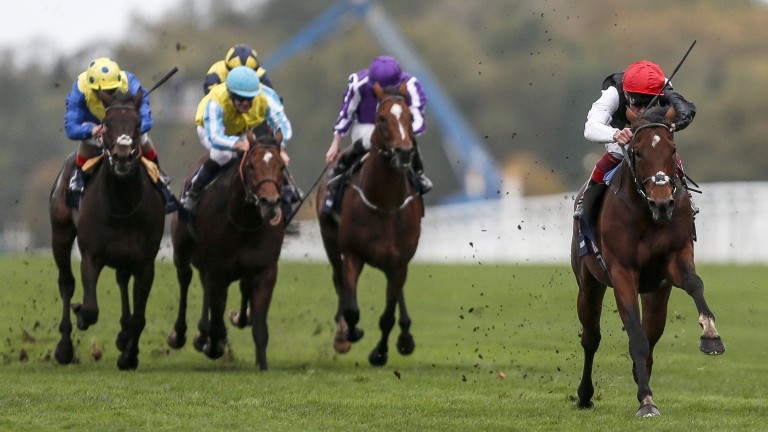 Cracksman: a return to Ascot could be on the cards
Alan Crowhurst/Getty Images
1 of 1
By David Carr UPDATED 6:40PM, OCT 2 2018

Owner Anthony Oppenheimer admitted on Monday that Cracksman's prospects of running in the Qatar Prix de l'Arc de Triomphe are not looking good.

And punters seem to be losing faith in the three-time Group 1 winner, who is now as big as 14-1 for Sunday's showpiece.

Unsuitably quick ground caused the John Gosden-trained four-year-old to bypass the King George VI and Queen Elizabeth Stakes and Juddmonte International in the summer, and it is feared conditions will be against him once more at Longchamp.

"At the moment I think it's very firm," said Oppenheimer. "He simply can't act on that.

"I know Mr Gosden has got somebody walking the course a couple of times this week to see how much water the French put on, but it doesn't look particularly good."

Asked whether Cracksman is odds-against running, Oppenheimer replied: "Common sense dictates that's so. You never know and they may put a lot of water on, we'll see, but it's entirely Mr Gosden's decision and he doesn't want to do any damage to the horse.

"There's only really one other suitable race, the Champion Stakes. Even if it's good to firm we'll have to run there because it'll be his last race."

Cracksman, who put up a top-class effort to win last year's Champion Stakes by seven lengths, was officially rated the best horse in Europe in 2017 and is reckoned right back to form by Oppenheimer.

"He's looking absolutely fantastic," the owner said. "It's really the most maddening thing, we'll just keep our fingers crossed. It's so disappointing when you know how good he is – and he really is brilliant – and he's right back to his very best. It's driving us all round the bend."

Rivals be warned: fresh filly Enable ‘in great shape’ as clock ticks down to Arc

With the sun continuing to shine in Paris, which was largely dry throughout September, the going at Longchamp on Monday was measured at 3.1, or good, on the penetrometer.

The forecast is for dry weather, with sunshine on Thursday and Friday. There is a chance of rain on Saturday evening into Sunday morning.

Gosden's 2017 Arc winner Enable headed 22 acceptors on Monday for a race in which Sea Of Class is set to be supplemented later this week.

Sir Michael Stoute revealed on Monday that King George runner-up Crystal Ocean will not be added to the field.

Cracksman may be far from a certain runner, but the horse who gave him a big scare in the Coronation Cup will definitely take his chance.

Salouen ran the 2-7 favourite to a head when a 33-1 shot at Epsom in June, caught only in the final strides, and will be ridden by leading French jockey Maxime Guyon for the first time this season.

"Maxime rode him a couple of times last year, he knows the horse and knows the track," said trainer Sylvester Kirk.

"This has been the plan for Salouen. We're all aware of the massive challenge but it's just nice to be in the race.

"He's the outsider of the whole lot but I don't mind that. He's run consistently and probably deserves to be a little bit shorter, but the money is for other horses."

He added: "If he runs up to his best form he might nick a place. He was a big price at Epsom, though Cracksman wasn't really himself and we got a soft lead and had everything go our own way. But another performance like that would give him a shout."

Godolphin's impressive recent Longchamp Group 3 winner Ghaiyyath was among those taken out of the Arc on Monday and trainer Charlie Appleby said: "He's in the Champion Stakes and His Highness Sheikh Mohammed and I will discuss this week whether we run him at Ascot or leave him for next year. He's an exciting horse to have."

Unbeaten Prix Niel winner Brundtland runs in Saturday's Prix de Chaudenay and Appleby said: "His work has never been exciting but you can't fault what he's done, he turns up and gets the job done. We hope he'll improve with the step up to a mile and seven furlongs."

Essential guide to Paris: how to make the most of Arc weekend

Appleby is also set to run Nassau Stakes winner Wild Illusion in Sunday's Prix de l'Opera and said: "She's had a nice break since her last start at Goodwood and this was always our plan. Her preparation has gone very well and we're looking forward to seeing her run."

For unbeatable build-up, features and previews for the Arc, go to racingpost.com/news and follow @RacingPost on Twitter

FIRST PUBLISHED 7:10PM, OCT 1 2018
It's so disappointing when you know how good he is ? and he really is brilliant ? and he's right back to his very best