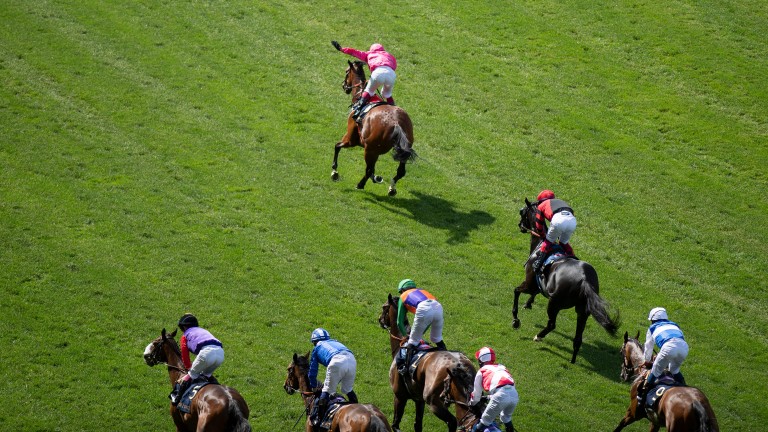 Battaash will be prepared for a tilt at winning a fifth King George Stakes at Goodwood next month with trainer Charlie Hills believing a lack of a prep run caught his star sprinter out in the closing stages of the King's Stand Stakes.

A training setback meant Battaash made his seasonal reappearance in the Group 1 on Tuesday, but he was nevertheless sent off the 11-8 favourite to capture the race for a second year running.

The seven-year-old, racing in the silks of the late Hamdan Al Maktoum’s Shadwell Estates, moved through to lead with two furlongs to go but was unable to hold off the late surges of Oxted, Arecibo and Extravagant Kid, who filled the places.

“I'm really pleased with him, proud of him, he ran a great race,” Hills said. “They went very, very fast and I think it's just caught him out for match fitness. He got a little bit leg-weary in the last half-furlong.

“For me, he ran great. He's shown all his speed that he's shown before. Obviously you'd like to have won. We'll train him now for Goodwood and look forward to that.”

Hills was keen to point out Battaash had behaved himself well at Ascot, something he had not done earlier in his career, but admitted the course was not his preferred track.

“He behaved brilliantly before and after, he just got a little bit leg-weary,” Hills said. “He didn't blow much after but it's just found him out.

“This track is not his ideal, it's a stiff five furlongs, it takes a bit of getting. Blue Point kept doing him here.”

Jockey Jim Crowley was also confident Battaash would improve for the run and said: “He will come on plenty for that run. He just needed it more today.”

January date for trial of Royal Ascot protesters who deny aggravated trespass 'He's Mr Reliable' - Hills stalwart Geoff Snook calls time on 51-year career Racing has its problems and it's up to racing to solve them A true icon is a rare beast indeed - but brilliant Battaash is more than worthy Will Baaeed end the year as the best miler in Europe? Our experts have their say Groom-to-be Buick loved up for more than one reason as Suesa strikes