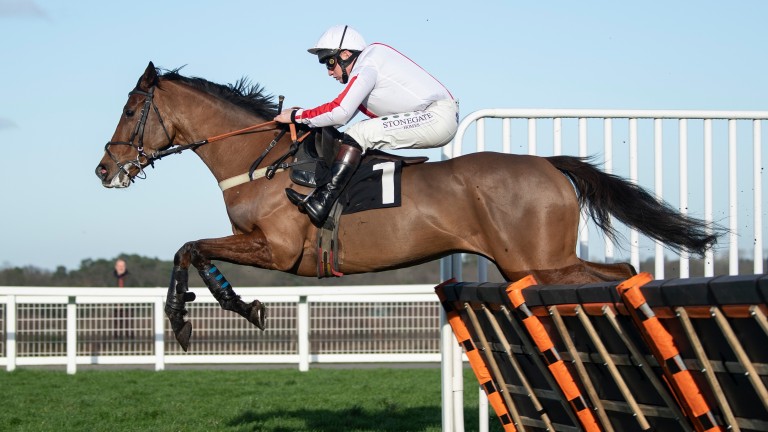 Goshen: takes on nine in the Unibet International Hurdle at Cheltenham on Saturday
Edward Whitaker (racingpost.com/photos)
1 of 1
By James Stevens UPDATED 12:42PM, DEC 10 2020

Goshen will take on nine classy rivals in the Unibet International Hurdle (3.00) at Cheltenham on Saturday as he begins his road back to the festival in March.

The Gary Moore-trained four-year-old returns over hurdles for the first time since his final-flight mishap in last season's Triumph, with Jamie Moore back in the saddle.

Goshen is a general 7-1 chance for next year's Unibet Champion Hurdle and will look to emulate Rooster Booster, who was the last International winner to capture the festival showpiece three months later.

Daryl Jacob partners Sceau Royal, who is looking to build on a fine season over hurdles which has included victory in the Elite Hurdle at Wincanton and a good second to Epatante in the Fighting Fifth at Newcastle.

After two odds-on defeats over fences, Paul Nicholls takes Stormy Ireland back over hurdles and she is joined in the race by Greatwood runner-up Ballyandy, 2019 Champion Hurdle third Silver Streak and Summerville Boy. Ch'tibello and Song For Someone complete the line-up.

The feature Caspian Caviar Gold Cup Handicap Chase (1.50) is headed by the 157-rated Master Tommytucker, with the hat-trick-seeker ridden by Harry Cobden.

A maximum field of 17 are permitted for the £105,000 handicap and the absence of Peterborough Chase runners Mister Fisher and Clondaw Castle allows Romain De Senam and Militarian into the race, while Musical Slave is first reserve and Ibis Du Rheu second.

FIRST PUBLISHED 11:40AM, DEC 10 2020
The Gary Moore-trained four-year-old returns over hurdles for the first time since his final-flight mishap in last season's Triumph