Confirmed runners and riders for the Gold Cup at Royal Ascot 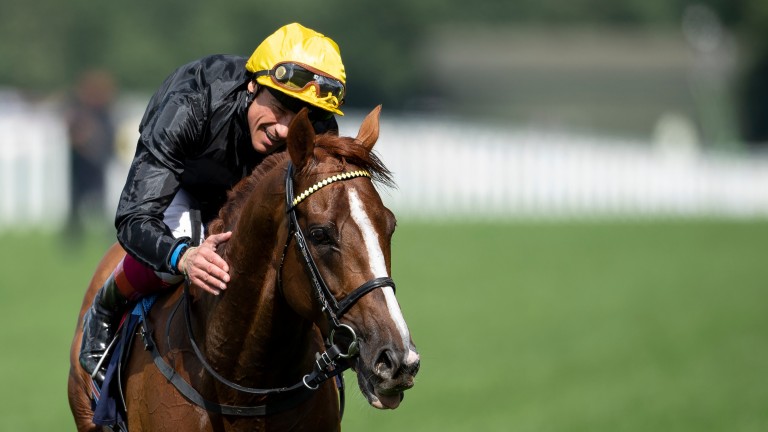 Stradivarius: attempting for a fourth Gold Cup success on Thursday
Edward Whitaker
1 of 1
By James Stevens UPDATED 11:44AM, JUN 15 2021

Stradivarius will take on 12 rivals in his quest to record a record-equalling fourth victory in the Gold Cup on day three of Royal Ascot on Thursday.

The John and Thady Gosden-trained stayer remains a 5-6 favourite for the Group 1 feature, with Frankie Dettori confirmed to ride as expected.

Chief threat Subjectivist is one of two in the race for Mark Johnston with Joe Fanning booked for the ultra-impressive Dubai Gold Cup winner. Nayef Road, a ten-length second to Stradivarius here last season, will be ridden by Ben Curtis.

Aidan O'Brien fields three runners with jockey bookings for Serpentine, Santiago and Amhran Na Bhfiann yet to be confirmed. Donnacha O'Brien runs Emperor of The Sun, while St Leger-winning partnership Joseph O'Brien and Tom Marquand team up with Twilight Payment.

Trueshan returns to the scene of his Long Distance Cup victory with Hollie Doyle confirmed to take the ride. Spanish Mission and Princess Zoe also run, while Master Of Reality and Ranch Hand were removed at the declaration stage.

Noon Star heads 13 declared for the Ribblesdale Stakes as she looks to build on her second-place effort to subsequent Oaks winner Snowfall. She takes on a good field including the exciting Eshaada and Divinely, the mount of Ryan Moore.

Who are the bookies backing? Eight layers give the view from the trading floor (Members' Club)

What's on this week: the biggest names in racing head to Royal Ascot

FIRST PUBLISHED 11:40AM, JUN 15 2021
Chief threat Subjectivist is one of two in the race for Mark Johnston with Joe Fanning booked to ride the ultra-impressive Dubai Gold Cup winner