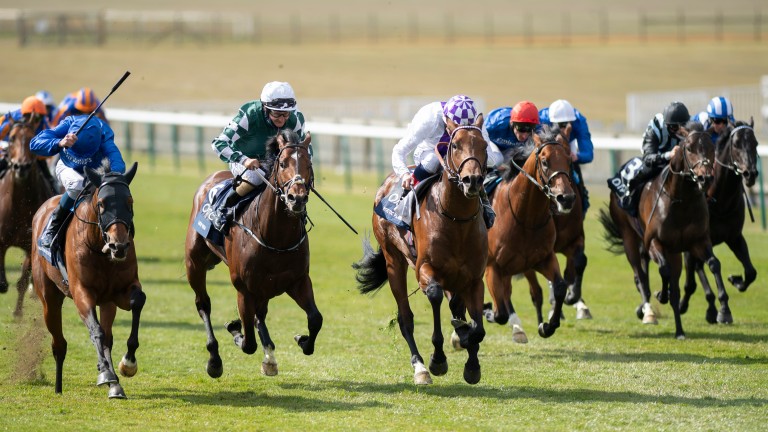 Poetic Flare (centre): does not feature among the confirmations for Saturday's QEII Stakes
Edward Whitaker (racingpost.com/photos)
1 of 1
By Scott Burton 2:20PM, OCT 11 2021

The five-day confirmations promise a glittering set of match-ups for Qipco British Champions Day on Saturday with nearly all the key players standing their ground as well as some intriguing supplementary entries.

The Qipco Champion Stakes (3.50) features Mishriff, who was last seen romping to success in the Juddmonte International at York, as well as Derby hero Adayar, who has been left in with an open view as to whether he attempts to back up his fourth-placed effort in the Qatar Prix de l'Arc de Triomphe 13 days ago.

With an official rating of 127, the pair are the joint top-ranked horses in the world alongside the now-retired St Mark's Basilica.

Stradivarius to be left in Long Distance Cup on Champions Day

Addeybb is still on course to defend the crown he won 12 months ago while his stablemate Al Aasy also holds an entry for the race, which is the richest run in Britain and worth £1.2 million.

It will also benefit both financially and competitively from the £75,000 supplementing of a third William Haggas-trained candidate, dual Group 2 winner Dubai Honour.

Fourteen horses have been left in the race with Aidan O'Brien responsible for three of those in the shape of Bolshoi Ballet as well as Love and Snowfall, both of whom also feature in the entries for the Champions Fillies & Mares Stakes (2.35) over a mile and a half earlier on the card.

The Queen Elizabeth II Stakes (3.10) is equally as exciting, with almost every major player in the European mile division pitted against one another. 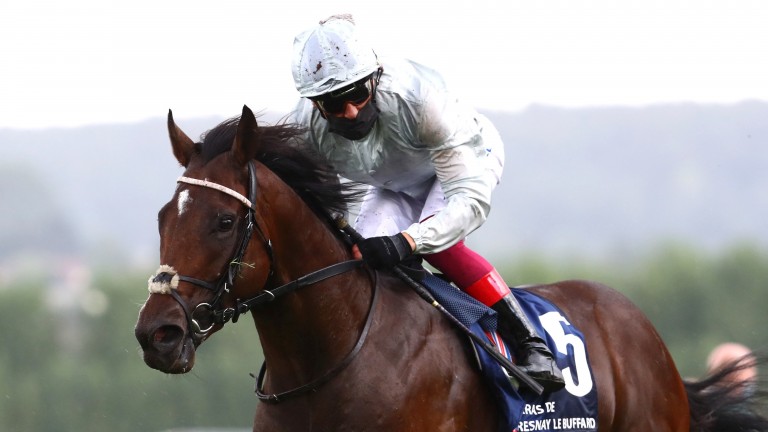 Palace Pier: star on course to meet Baaeed and a host of other top-class milers at Ascot
France-Galop/ScoopDyga

Palace Pier is the top-rated miler across the globe, but will probably need to win to confirm he ends the year in that number one spot given the presence of Baaeed, Alcohol Free and last year's winner The Revenant among ten confirmations.

Poetic Flare is a notable absentee but Master Of The Seas, who was narrowly beaten by Jim Bolger's stable star in the Qipco 2,000 Guineas, does feature at the six-day stage.

Charlie Fellowes has added Vadream to a fully-loaded Champions Sprint (2.00), a race that still boasts 22 entries despite the injury-enforced absence of Starman.

Stradivarius versus Trueshan round three also remains a possibility after both were left in by connections at the six-day stage of the Long Distance Cup (1.25), while Princess Zoe and Search For A Song are also among the 20 horses.

What's on this week: an epic Champions Day awaits as classy jumpers emerge

FIRST PUBLISHED 2:20PM, OCT 11 2021
Palace Pier is the top-rated miler across the globe, but will probably need to win to confirm he ends the year in that number one spot

Pick A Nom announced for three stallions at Chapel Stud Pivotal to Pivotal's success and longevity? Routine, plus a daily dose of honey Godolphin's Creative Force to have Group 1 Al Quoz Sprint as early 2022 target 'When I first saw him he looked dreadful' - Addeybb on road to recovery