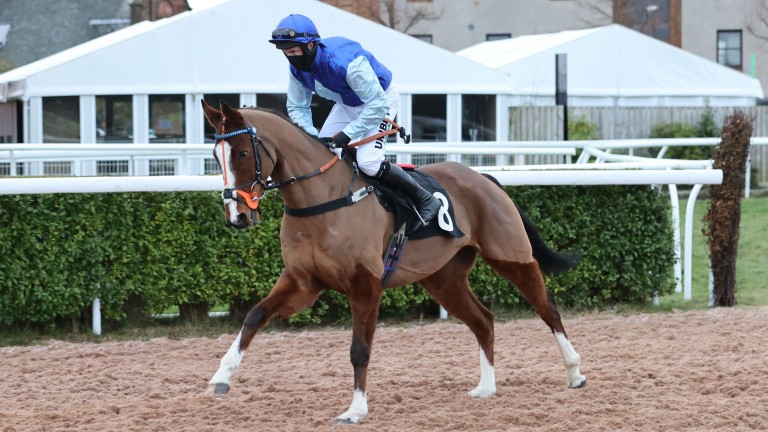 Gallahers Cross: 4-5 favourite who failed to land the final leg of a huge treble on Sunday
John Grossick (racingpost.com/photos)
1 of 1
By Andrew Dietz and Tom Ward UPDATED 8:29PM, FEB 7 2021

Bookmakers escaped what they estimated would have been a multi-million pound payout after the final leg of a gambled-on big-priced treble went down at Musselburgh.

The Daragh Bourke-trained Gallahers Cross was sent off 4-5, having opened at a general 33-1 on Saturday, but failed to follow up the earlier successes of Blowing Dixie at Southwell and Fire Away at Musselburgh.

Gallahers Cross travelled strongly into the straight in the 2m6f handicap hurdle for Alain Cawley and touched 1.4 in running but began to struggle between the last two hurdles, with the Paul Nicholls-trained Get The Appeal running out a decisive winner. 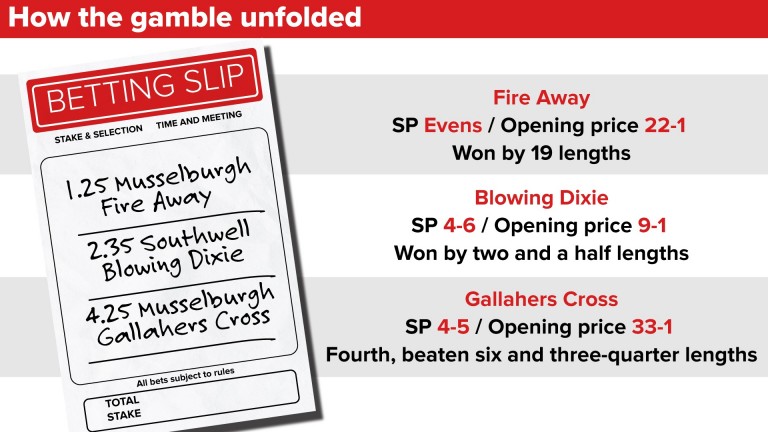 Earlier, Blowing Dixie landed the second leg with a comprehensive success in the 1m4f handicap at Southwell. Trained and owned by Iain Jardine, Blowing Dixie was sent off 4-6 favourite having opened at 9-1 on Saturday.

That victory came after Fire Away had landed the first leg of the gamble in the opening 2m4½f novice handicap chase at Musselburgh.

Fire Away was a general 22-1 shot when markets opened on Saturday, but was soon trimmed into 6-4 before being sent off even-money favourite.

At the request of the BHA's integrity department, connections of all three runners were interviewed by the raceday stewards before their respective races.

They were asked to provide information regarding the selection of the race, their expectations, and riding instructions. Their comments were noted.

The gamble was highlighted on Sunday morning by BetVictor's head of trading Chris Poole, who said: "We've taken a lot of multiple bets on three horses, all at very big prices and all at roughly the same time last night.

"That's our worst nightmare because there's nothing we can do about these liabilities. We're stuck with it and we'll lose quite a lot of money. I can't go into figures."

Our Head of Trading explains the impact this has had and why you will have to take shorter prices now! pic.twitter.com/9lRRX6ewxf

After the final leg of the treble went down, Paddy Power spokesman Paul Binfield said: “It’s fair to say our liabilities would have probably been on a par with others in the industry and there was a collective sigh of relief from bookmakers when Paul Nicholls’s Get The Appeal crossed the line first.”

Colin Vickers, chief steward at Musselburgh, said: "At the request of the BHA integrity department, because of the unusual betting patterns, we did interview all three of the trainers [Laura Morgan, Iain Jardine and Daragh Bourke] and their comments will be forwarded to BHA head office to help with their further investigation.

'I got told there was big money coming from Ireland'

On his first start for trainer Laura Morgan, having left Bourke earlier this month, the eight-year-old Fire Away obliged by 19 lengths.

Morgan said: "We've had the horse for only 11 days, having bought him from Daragh Bourke. He had a couple of horses for sale and I bought him.

"I did actually go to buy the other lad, but we bought this one instead. I definitely got a good buy and, fingers crossed, he'll win a few more.

"I got told there was big money coming from Ireland, but I wouldn't have a clue to be honest. One of my bumper horses got smashed here and he got stuffed." 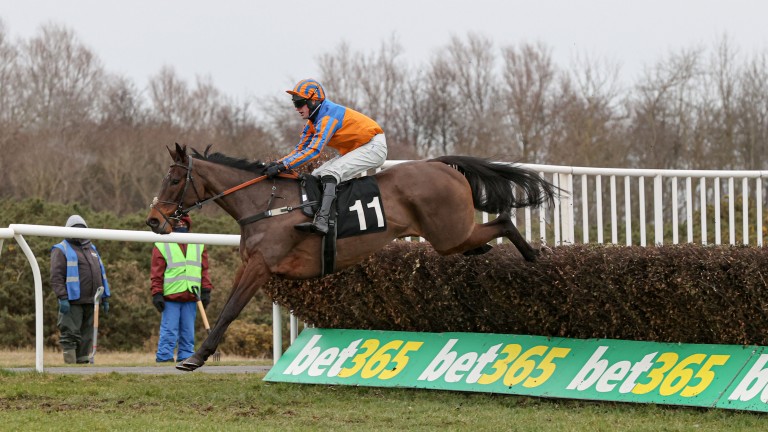 Fire Away: was heavily punted before winning at Musselburgh, the first leg of a big treble
John Grossick (racingpost.com/photos)

McLernon said about Fire Away: "I rode him the last day at Kelso, which was quite a while ago, and whether it was the new trip or track, I'm not too sure.

"He was found a good opportunity here and has done it well. I got a nice lead, he jumped away and kept going."

Comment: gambles can be sensationalised but they can also erode confidence in racing (Members' Club)

Jardine, who was at Musselburgh with his runners while the other horse won at Southwell, said: "I never knew anything about it [the gamble]. I noticed my horse's price coming in rapidly in the betting last night, but I thought it didn't really concern me.

"I was pleased our horse won. He was dropping in grade. We had a hell of a job getting him right and it didn't come as a shock that he won. He's got course form there and has come down the ratings a bit. Somebody knew more than I did, anyway."

Bourke was on course to watch Gallahers Cross at Musselburgh but, asked by the Racing Post about the gamble, the trainer declined to comment.

Who are the trainers of the horses involved?

Laura Morgan was travelling head groom to both Chris Bealby and Jonjo O'Neill before setting up on her own, initially at Bealby's old premises in Lincolnshire before transferring operations to the family stud farm at Waltham-on-the-Wolds in Leicestershire. She has sent out a career-best 15 winners over jumps so far this season.

Iain Jardine has enjoyed plenty of success as a dual-purpose trainer based at Len Lungo's former yard in Carrutherstown in Dumfriesshire since 2008. In 2017 Jardine recorded a career-high of 52 wins on the Flat, highlighted by Nakeeta's victory in the Ebor.

Daragh Bourke began his racing career with Noel Meade, riding 40 winners during his time as a jump jockey. He set up at Waterbeck near Lockerbie – about eight miles from Carrutherstown – in 2017-18, and has saddled two winners so far this season from 14 individual runners.

Gamble landed: memorable coups from down the years

FIRST PUBLISHED 2:12PM, FEB 7 2021
We've only had the horse for 11 days, having bought him from Daragh Bourke. He had a couple of horses for sale and I bought him