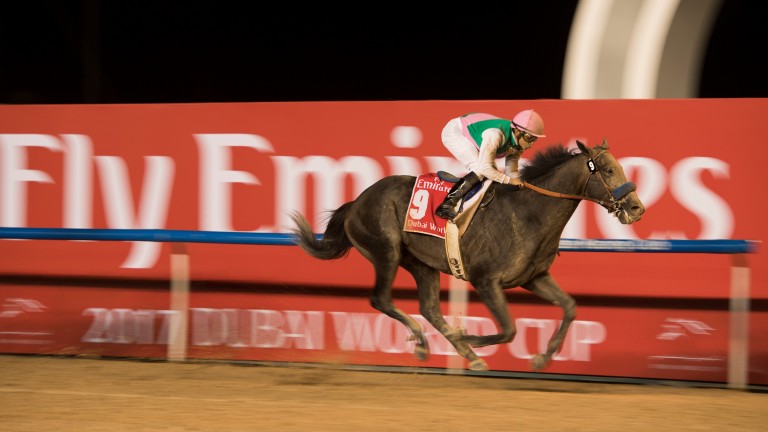 Arrogate, the breathtaking winner of the Dubai World Cup in 2017 when coming from a seemingly impossible position to score in sensational style, has died at the age of seven.

The son of Unbridled's Song had been suffering from an illness that began last week. It is still unclear what the illness was and a post-mortem was being carried out on Tuesday night.

Arrogate had a successful breeding season at his owner Khalid Abdullah's Juddmonte Farm in Kentucky before his coverings were suspended last week due to a suspected sore neck.

Later in the week he fell to the ground in his stall and efforts to get him back up proved unsuccessful. He was transported to the Hagyard Clinic under the care of Dr Bob Hunt and Dr Nathan Slovis.

In a statement issued on Tuesday, Juddmonte said: "They worked tirelessly eliminating all the obvious causes and performing all available tests, including spinal tap evaluation, x-ray, ultrasound, CT scan and many blood tests.

"Unfortunately, Arrogate was still unable to stand after four exhausting days for him. His will to fight, so valuable to him on the racetrack, became a challenge in his care. When serious secondary health issues set in, the decision was made to put him to sleep."

The 2016 Breeders' Cup Classic winner landed seven of 11 starts including a freakish 13-and-a-half-length romp in the Grade 1 Travers Stakes to announce his arrival on the world scene. He had done little to hint at what was to come prior to that, breaking his maiden in the June of his three-year-old season and posting two wins in optional claimers before making his stakes debut in the Travers.

He then went on to beat US Horse of the Year California Chrome in a memorable battle at Santa Anita before winning the inaugural running of the Grade 1 Pegasus World Cup in the January of his four-year-old season.

Despite those already significant achievements on his CV, it will be the incredible effort Arrogate posted under Mike Smith at Meydan which he will forever be known for. Sent off the 1-3 favourite, he appeared to have lost all chance at the start before bypassing each of his 13 rivals to win by a comfortable two and a quarter lengths.

That proved to be his final victory with Arrogate's subsequent three starts at Del Mar drawing a blank, his trainer Bob Baffert feeling he was unsuited by the fast surface there.

The winner of more than £13 million in his career and named the Longines World's Best Racehorse in 2016 and 2017, Arrogate will be represented by his first two-year-olds in 2021.

How Arrogate became highest-earning horse in history in 140 days

Arrogate v Frankel - how does Cup hero match up to a legend?

FIRST PUBLISHED 7:06PM, JUN 2 2020
He appeared to have lost all chance at the start, before bypassing each of his 13 rivals to win by a comfortable two and a quarter lengths