Symonds and Dennis celebrate their first winner since joining forces 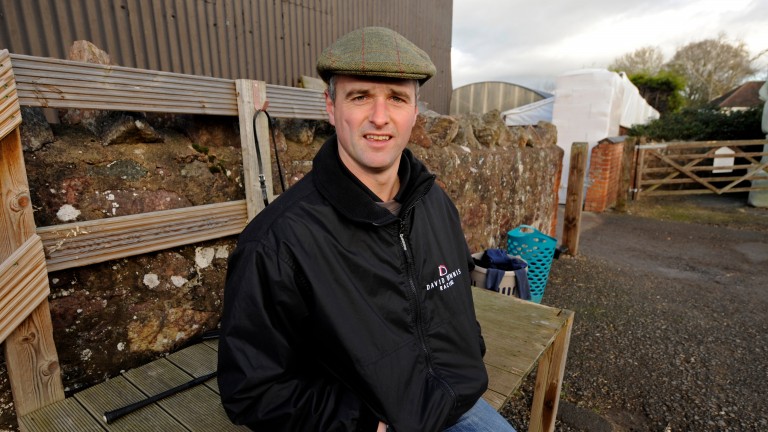 Tom Symonds and David Dennis marked their new alliance with a winner on Saturday when Danecase landed a Yarmouth handicap.

Dennis sent out more than 150 winners during a seven-year spell training on Worcestershire before joining Symonds as assistant trainer in May and moving a significant number of horses with him.

"I'd like to thank my owners for their unwavering support and understanding," said the former jump jockey. "Financially, it wasn't viable to stay where I was.

"Combining with Tom will hopefully benefit both of us and strengthen the yard for the future. We're open to what the future holds in terms of trainers' licences.

David Dennis: has teamed up with Tom Symonds
Martin Lynch

"I'm really looking forward to this new chapter. Training is very much a numbers game. It's a competitive sport and we both look forward to sending out more runners and more winners together."

Symonds, 35, enjoyed a strong finish to the jumps season when Song For Someone won the Grade 2 Kingwell Hurdle at Kempton.

"There's no doubt David will make a significant contribution to our business," added Symonds. "I'm very conscious of the support I have received in this new venture from not only his owners, who are transferring horses, but my own, whose backing I value immensely."

Flat field sizes back to maximum

Flat races will revert to their maximum capacity after the BHA conducted a review of field sizes.

All non-Pattern and Listed races had been restricted to a maximum of 14 runners in recent weeks following racing’s resumption.

Off-course claims will continue to be allowed for all claiming races, although claimed horses must be collected by one hour before the final race on the card.

The BHA has advised trainers to avoid hosting yard open days for the public in order to reduce footfall and minimise the risk of infection.

The Animal Health Trust (AHT) is to begin a winding-up process after the charity was unable to secure significant funding needed to make its long-term future viable.

The Trust has held an important role in maintaining the high standards of equine welfare within British racing, including monitoring last year's outbreak of equine flu.

It also carried out a number of roles within the horseracing industry, including disease surveillance and specialist veterinary research.

A meeting of racing industry bodies was held on Friday morning where it was decided that the BHA would take over from the AHT in these roles.

A BHA spokesman said: "The Animal Health Trust has played an important role in maintaining the high standards of equine health and welfare in the racing industry and the equine sector. Its staff, led by director Richard Newton, responded superbly when we faced an equine flu outbreak last year.

"We recognise their world-leading expertise in epidemiology and veterinary research and do not want to see this lost to the British equine sector.

"We believe that if the horse sector maintains the strong collaborative approach it has adopted in combating disease and engaging government over issues such as Brexit, it should be possible to maintain an effective surveillance programme and the specialist veterinary research capability."

Well-known bookmaker Danny McNab has died at the age of 83.

Danny worked in the bookmaking industry for more than 60 years, and was president of the West of England Bookmakers association for 17 years.

He had a great love was racing and covered all the major racecourses in the south and south-west, while also holding a post at Bristol greyhound track for over 20 years.

He enjoyed point-to-points and the last meeting he attended was at Larkhill on March 15.

His funeral will take place at South Bristol Crematorium at 11.30am on Thursday, July 9, and his family have said that any donations to the Injured Jockeys Fund in his name are appreciated.

FIRST PUBLISHED 4:26PM, JUL 4 2020
We recognise their world-leading expertise in epidemiology and veterinary research and do not want to see this lost to the British equine sector

Three-mile novice hurdle abandoned at Southwell due to high temperatures 'Heartbreaking': Cheltenham hero Croco Bay suffers fatal injury at Southwell How did she do it before? Looking back on Enable's previous Arc preparations More Deauville delights plus another weekend of ITV action 'The rules should be stricter': trainer weighs in on interference debate Top Phoenix Thoroughbreds executive cuts ties after money laundering allegations