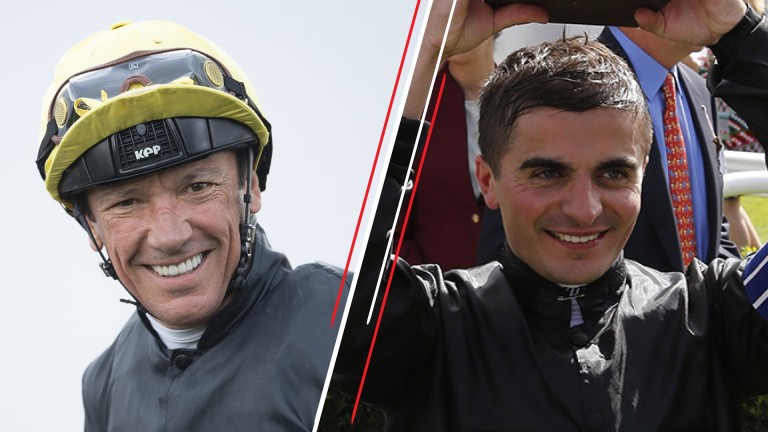 Frankie Dettori will be replaced by Andrea Atzeni on Stradivarius at Goodwood next week
1 of 1
By Peter Scargill UPDATED 7:35PM, JUL 19 2022

One of British racing's most successful partnerships came to an end on Tuesday with Frankie Dettori being replaced by Andrea Atzeni aboard Stradivarius for next week's Al Shaqab Goodwood Cup (3.35).

The decision to replace Dettori was made by Stradivarius’s owner-breeder Bjorn Nielsen, and marks the latest chapter in the fallout from the public criticism and scrutiny the rider endured both during and after Royal Ascot last month.

Nielsen said: "Frankie Dettori, who has enjoyed a great relationship with Stradivarius and ridden him to many brilliant stakes victories – more than he has any other horse – will by mutual agreement give up the ride to Andrea Atzeni in the Goodwood Cup.

"Frankie remains not only 'the Strad's' biggest fan, but a very good friend and, of course, I look forward to seeing him continue his phenomenal career as one of the greatest big-race jockeys of all time." 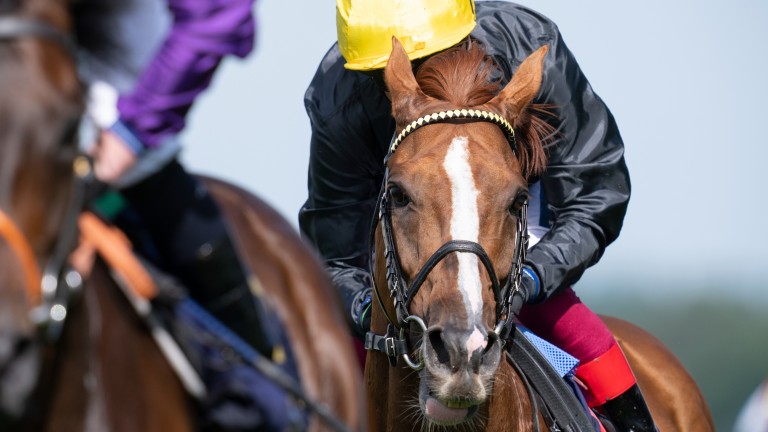 Stradivarius and Frankie Dettori came up short in a bid to win a fourth Gold Cup at Ascot
Edward Whitaker (racingpost.com/photos)

Together, Dettori and Stradivarius won 15 Group races, including the Group 1 Gold Cup at Royal Ascot three times, the Group 1 Goodwood Cup twice and the Group 2 Lonsdale Cup at York's Ebor festival on three occasions, although they twice faltered in their effort to emulate Yeats by winning a fourth Gold Cup.

Dettori and joint-trainers John and Thady Gosden initially agreed on the jockey taking a "sabbatical" from his position as main rider after Royal Ascot, during which John Gosden had twice aired significant frustrations and disappointment at rides given by Dettori to his horses, as well as his attitude before and after races.

The ride given to Stradivarius proved a major flashpoint with John Gosden, Nielsen and Dettori engaging in animated discussion after the eight-year-old finished third in the Gold Cup to Kyprios, having drifted back from his prominent position and then meeting trouble in running before being forced to switch wide in the home straight for a clear run.

Speaking the day after the Gold Cup, John Gosden said: "Our hero overcomplicated it yesterday and I was clear in my definition of that. I think it's right to say what you think, it's over, it's past, it's finished and we move on."

Dettori placed the emphasis on Stradivarius's age after the Ascot defeat, saying he did not have the speed of the younger horses and that "it's been a good era for him".

Having been dramatically replaced on the Gosdens' horses on Criterion Stakes day at Newmarket last month, Dettori outlined how he planned to spend much of July riding abroad while reaffirming his commitment to continue riding until at least the end of next year.

However, less than two weeks after the 'sabbatical' was announced, Dettori returned to riding many of the Gosdens' leading horses, including Inspiral, who was beaten at odds of 1-7 in the Group 1 Falmouth Stakes, and Emily Upjohn, who lines up in Saturday's King George VI and Queen Elizabeth Qipco Stakes, with the universal support of the owners involved. 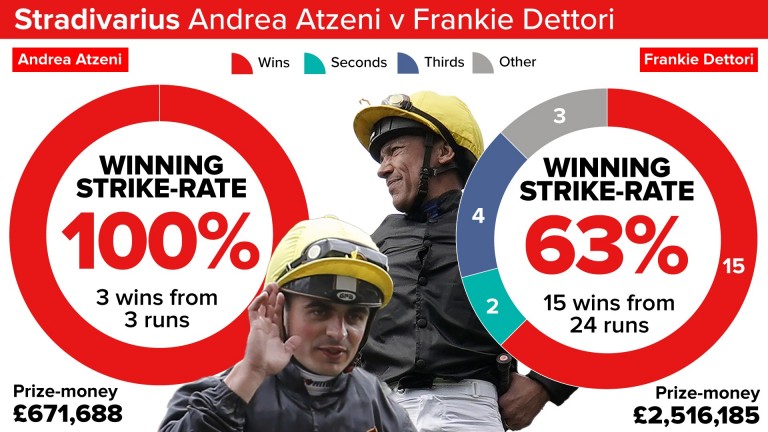 With Dettori not riding Stradivarius in what may be the horse's final race in Tuesday's Group 1, the mount will be taken up by Atzeni, who is unbeaten in three starts on the star stayer having won the 2017 Queen's Vase and Goodwood Cup on the son of Sea The Stars, as well as filling in for Dettori when he was suspended for the 2018 running of the Goodwood Cup.

Nielsen added: "Andrea will be no stranger to Stradivarius as they are undefeated together, winning the 2017 and 2018 Goodwood Cups as well as the 2017 Queen's Vase."

Neither Dettori nor Atzeni could be reached for comment on Tuesday.

Stradivarius is the general 2-1 second favourite for the Goodwood Cup behind 7-4 favourite Kyprios, with Gold Cup second Mojo Star and Trueshan, winner of the Northumberland Plate on his most recent outing, next in the betting.

Trueshan, who landed last year's Goodwood Cup on soft ground after Stradivarius was a late non-runner, drifted out to 6-1 (from 3-1) for this year's race on Tuesday as Britain experienced record-breaking heat and with the Goodwood ground being labelled good to firm, good in places.

However, trainer Alan King indicated he was eager to run Trueshan if the ground was good next week, and added when speaking to the Racing Post's Front Runner: "He did a little bit of work on Saturday and he's going to work on Wednesday. He's exactly where we want him."

Whether Mojo Star lines up is more uncertain with trainer Richard Hannon planning to speak with owner Kia Joorabchian before making a final decision.

FIRST PUBLISHED 10:20AM, JUL 19 2022
I look forward to seeing him continue his phenomenal career as one of the greatest big-race jockeys of all time

'It looks winnable' - David Evans drawn to Group 3 for star sprinter Rohaan Racing must stop trying to be something it's not - team events just don't work A record-breaker but 125 rating did not entitle him to be hailed great champion The charismatic model thoroughbred who kept us guessing right to the end Stradivarius: 'He's been one of the soundest horses who's ever lived' Stradivarius confirmed to stand at the National Stud in 2023