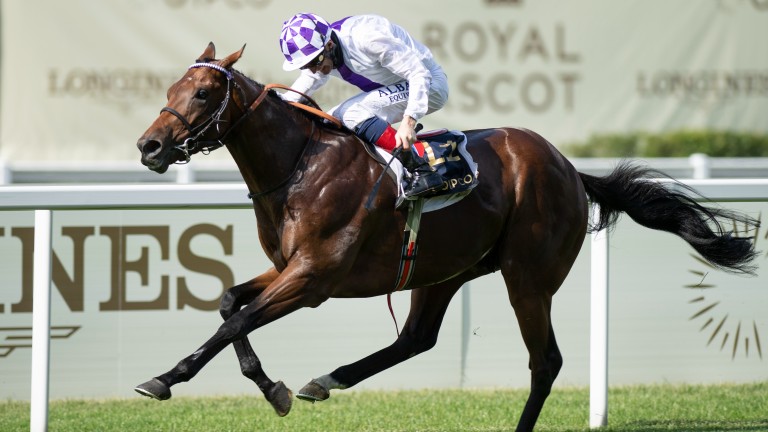 Jim Bolger hailed Poetic Flare for having "everything you would look for in a horse" and spoke of his regret he would not be racing on as a four-year-old following news of his retirement to stand at Shadai Stallion Station in Japan.

The 2,000 Guineas winner showed class and consistency throughout a campaign which only saw him finish out of the first three once in eight starts and that came on very soft ground in the French 2,000 Guineas behind St Mark's Basilica.

His finest hour was at Royal Ascot in the St James's Palace Stakes when he posted an RPR of 124 in beating Lucky Vega by four and a quarter lengths.

Explaining the decision to end his racing career and sell him to stand at stud in Japan, Bolger told Nick Luck's daily podcast: "Naturally, I would have preferred if he was going to stud in Ireland, or Europe anyway, but circumstances didn't permit that. Hence he has to go to Japan. As you know, I run a semi-commercial operation and I have to keep the wheels on the wagon and it was a sale that I had to do.

"Reluctantly, I might add, as I think he was tailormade for a four-year-old career but nobody in this part of the world seemed to want him as a four-year-old so I was left with only one option and I had to take that option." 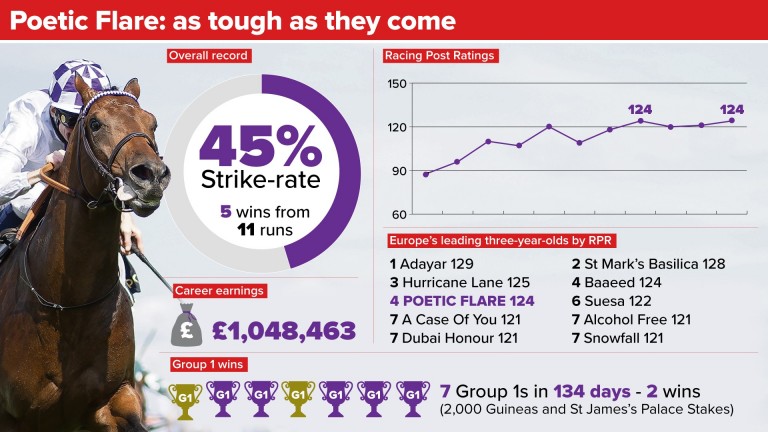 Bolger believed Poetic Flare should have been a very attractive racing and breeding proposition in this part of the world.

He said: "This horse should have been particularly attractive to everybody. He proved himself on the track. He had the looks, the physique, the temperament and the mind. Everything you would look for in a horse, he had it. To use a well-worn cliche, if ever there was a horse who ticked all the boxes, he certainly did.

When asked by Luck if he would be sad to see him leave for Japan, Bolger replied: "I wouldn't be a hugely sentimental person. I would regret the fact he's leaving, from a next year's racing point of view and the fact that he's not going to be available to people who did admire him for them to use as a sire. From that point of view I would have regrets but there won't be any pining."

Bolger's homebred, who ran in the colours of the trainer's wife Jackie, won five of his 11 races and earned more than £1 million in prize-money. He joins 31 other stallions on the island of Hokkaido.

FIRST PUBLISHED 9:15AM, OCT 13 2021
He had the looks, the physique, the temperament and the mind. Everything you would look for in a horse

Brian Ellison has plans for Ascot runner-up Tashkhan and a jumper to follow BHA in firing line again as David Bass leads defence of weighing-room culture Racing Postcast: Champions Day reaction plus a review of an eventful Flat season £5m prize-money row erupts as negotiations between Arc and horsemen break down Watch: The Big Jump Off 2021-22 | Your ultimate jumps season preview Progressive Captain Vallo could boss rivals off bottom weight