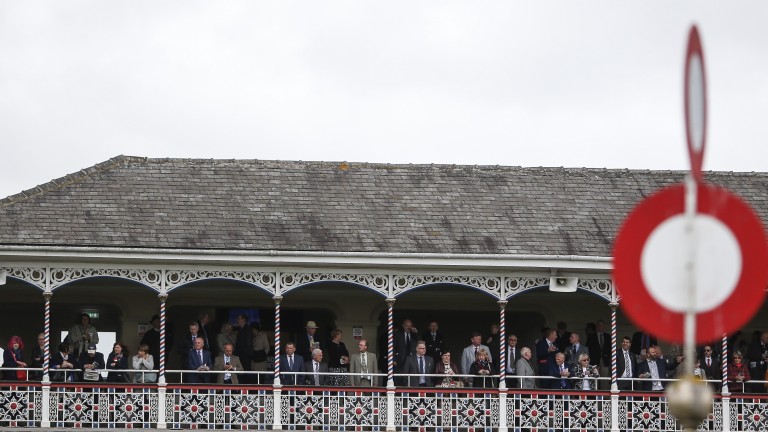 View from the top tier at York which finishes its three-day Dante meeting today
Alan Crowhurst
1 of 1
By Bruce Jackson 8:14AM, MAY 18 2018

John Gosden rather hogged the Group 2 headlines at York on Thursday and the Newmarket trainer looks to have another string to add to that bow with Stradivarius in the feature Mansionbet Yorkshire Cup.

As York comes to a conclusion so Newbury starts its two-day Al Shaqab Lockinge meeting, with Newmarket and later Hamilton plus Cork in Ireland in the late afternoon making it five Flat meetings.

Aintree's popular evening meeting and Downpatrick in Northern Ireland add some jumping action after the nine-to-fivers have finished work.

Good to firm, good in places (GoingStick 7.5)
Stands' side course. Stalls: far side rail in straight and centre for 1m6f race

Paul Kealy (£) heads the tipping team with the headline picks. Tips Box has plenty more from our other experts.

All the reaction from the impressive success of Roaring Lion in the Dante at York yesterday plus Alastair Down's inimitable take (£) on the day's racing.

Bill Barber explores and explains the government's FOBT stance in reducing the stakes on the betting shop machines to £2 from £100.

What did you make of Roaring Lion's Dante romp? Check out what Nick Watts made of the Classic trial.

If you need to remind yourself about the likely Aidan O'Brien challenge for the Investec Derby then let the Ballydoyle trainer tell you.

Bill Barber on the FOBT situation with bookmakers having to slash maximum bets to £2 from £100 buy order of the government.

The domestic football season may be ending with the FA Cup final to come but this week's announcement of England's World Cup squad to travel to Russia next month gives plenty for Bruce Millington, Dan Childs and Paddy Power's Jason Murphy to talk about in this week's Postcast.

John Gosden made it 50 winners in 2018 with his fourth of the day at Newmarket on Friday evening and has the chance to make it three York Group 2s in a row with Stradivarius.

For the freshest betting advice, based on latest going and market conditions, don't miss the Live Tipster every afternoon. Just click Raceday Live at racingpost.com or go to the mobile app.