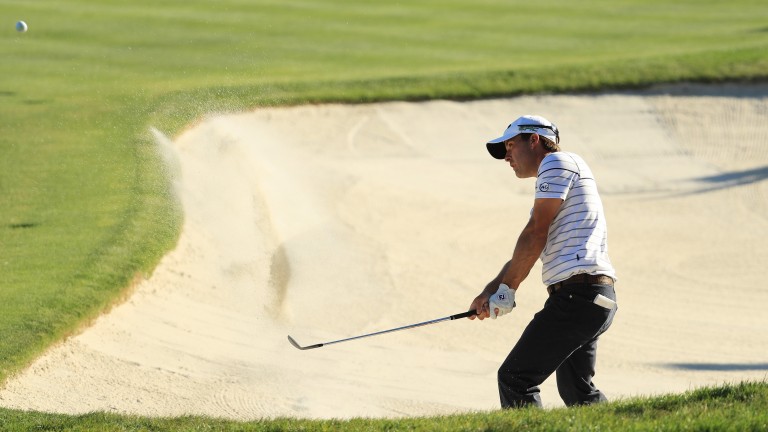 When you think you have seen it all before and nothing can faze you in the punting game, you are almost certainly wrong. I was utterly convinced I had reached that point, until last week.

I was hitting myself in an attempt to put a lid on this steaming hulk of angry flesh – whacking myself in the thigh as hard as I could. I hated Steve Palmer. I thought he was an arse. A stupid, fat, witless, smelly arse.

A massive mood dip had struck – it was of a severity I have not encountered this century – and I closed Easter Sunday awash with gloom. It was a day to celebrate the Lord rising from the dead, but betting blunders had embedded me in a tomb of despair.

The piece was a Q&A with the Bryan brothers in which the younger golfing sibling, Wesley, explained how he lived in a condo near the first tee of the Harbour Town Links during his college days. This was golden information. Wesley Bryan, a Heritage debutant, had actually played the venue a billion times. Couple that revelation with some excellent recent form, and he was clearly a live title contender. But my outright preview was already in newsagents, with no mention of Wes, and I felt as sick as the proverbial parrot.

The sickness intensified over the subsequent four days as Bryan made hay at his old stomping ground.

I did my best to alert Racing Post readers to Bryan's chance in the Thursday paper. I recommended a sell of his finishing position at 48 on the spreads. Then on racingpost.com on the Saturday, I tipped Bryan to win his third-round twoball. On the website again on Sunday, I advised Bryan for his final-round twoball, and also as an outright bet at 28-1. Four winning tips – two of them yielding handsome profit – but there was no 66-1 ante-post recommendation.

This has never happened to me before in two decades of golf punting – fancying someone before a tournament has started who I have not tipped or backed. I wholeheartedly apologise to readers for not being quicker off the mark with unearthing the Bryan nugget in the post-Masters haze, but I suffered as much as anyone from his victory.

I did not want to upset readers of this column with a 66-1 winner I had not tipped, so I did not back Bryan outright. I did not even jump aboard at the still juicy Sunday morning prices – I am told 40 was available on Betfair – which would have been perfectly ethical after my website recommendation. I felt I had to leave Bryan alone and endure the ultimate punishment if he ended up lifting the trophy - a mental torture that would hopefully force me to make sure I never let something like this happen again.

I thought Kevin Kisner was going to save the day when he hit the top of the leaderboard through six holes of the final round. I had £145 each-way on Kisner at 28-1 with bet365, along with £80 at 29 on Betfair. He reached what turned out to be the winning score, before making five feeble bogeys, plummeting to 11th place.

My only Bryan bet was £165 on a top-ten finish at 6-1 in a Betfred shop, but that merely recovered two-thirds of my weekly golf losses. "Oh, this is a big one, isn't it," chirped the friendly cashier when I picked up the return on Tuesday. I felt like saying: "Well, no, it's not – that number six should have another number six next to it and you should be giving me 11 bags." Instead, I just made some unintelligible noises.

Early last Sunday, the focus was the Hassan Trophy. I had £35 each-way on Renato Paratore at 150-1, winning a bag if he finished in the top seven and a further five bags if he triumphed. I was looking at 14 bags if Paratore and Kisner both won, with Bryan in the top ten.

Tennis. This came as an almighty shock to me on Sunday morning. I thought the only sports I would participate in from here to the grave would be golf, darts and snooker, but I got cajoled into a spot of tennis and was stunned by my form.

I have played only a handful of tennis matches in my life and assumed I was rubbish, but I raced into a 5-0 first-set lead against the father-in-law, a much more regular racket-wielder. Bageling your father-in-law is not on, so I mentally switched off for a game, before winning the set 6-1 and then going 3-0 up in set two.

It was at that point, considering a career-switch to professional tennis player, that I realised I was missing a key attribute. Fitness. I lost four games in a row, then the set 8-6, retiring hurt and left gasping for air on the floor wondering whether home or hospital should be my next destination.

Car stickers. What are they all about? Around 99 per cent of car stickers make me cringe so hard that my face hurts. I saw a car this week that had pictures of 'fairies' on it, with the words POWERED BY FAIRY DUST beside them. WTF? The driver is clearly deranged and should have their licence revoked immediately.

Another I saw read: A DOG IS FOR LIFE, UNLIKE A HUSBAND! The supposed joker driving the vehicle looked sad, haggard and bitter. I suspect she misses her ex-husband a great deal.

The most sickening sticker I have seen lately, though, read: DARE TO BE DIFFERENT. It was on a Volkswagen Golf! VW built its 30 millionth Golf in June, 2013. The daredevil driver had a short back and sides, a sensible jumper, and was obeying the highway code like everyone else. Maybe he wasn't wearing any pants. He was certainly a knob.