Avdulla fined for taking a bow after 100-1 win 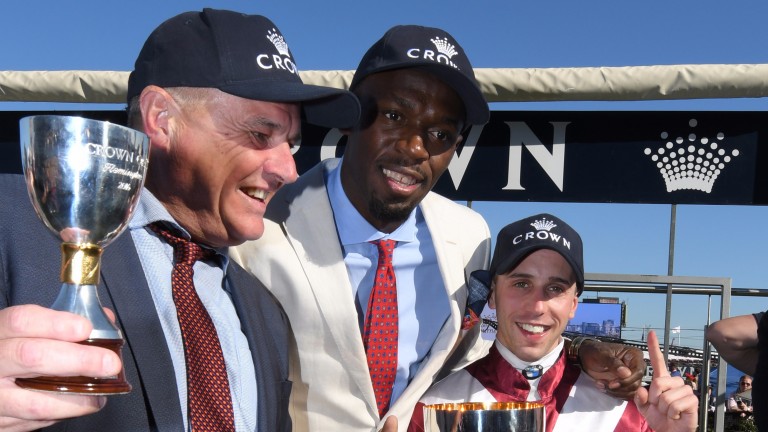 Lasqueti Spirit delivered one of the biggest shocks in the history of Australia's oldest fillies’ Classic, the Crown Oaks, on Thursday as she blitzed her rivals with a devastating front-running display to win at 100-1.

Jockey Brenton Avdulla was able to ease up close home, though he seemingly had more time on his hands than was good for him as he chose to bow to the crowd and was promptly fined $1,000 (£620/€690) by the stewards.

Lasqueti Spirit appeared to have taken inspiration from Usain Bolt, who was Thursday’s special guest at Flemington, as she shot off into a huge early lead in the extended mile-and-a-half Group 1.

The field was strung out in a manner rarely ever seen in a Crown Oaks but Lasqueti Spirit showed no sign of slowing up and still had a long lead as the field entered the straight.

It seemed certain she would tire, but she kept finding, crossing the line three and a quarter lengths clear of Harlow Gold in second. Eleonora, who almost caught Bolt with a kick in the parade ring, finished third, with short-priced favourite Yankee Rose unable to land a blow from way back in the field.

Explaining his antics as he surged towards the line in the $1 million race, Avdulla said: "It certainly wasn't premeditated, I came here thinking if I run eighth and pick up $20,000 for connections, then it was job done.

"I looked around at the 100m mark and saw I was lengths clear, then heard [commentator] Greg Miles saying nothing was making ground. I just stood up and I've got no idea why I bowed.

"Looking back at it now, it is a pretty good one, but it was just a spur of the moment thing. My ride was pretty good so I thought I'd recognise the crowd and thank them for their attendance."

Stewards did not thank the jockey for his actions, fining him for a celebration they argued could have led to an unnecessary accident.

Reflecting on the surprise victory on the Lee Curtis-trained filly, Avdulla said: "I was confident I could run top eight but every time I asked her to find a new gear, she just kept improving. That's the thing about being a 100-1 shot, nobody wants to go out after you.”

On the same card, the former Peter Chapple-Hyam-trained Arod, having his first run for Chris Waller but still owned by Qatar Racing, finished second in the Group 3 L’Oreal Paris Handicap.