Angles and trainer views for the Rose of Lancaster Stakes 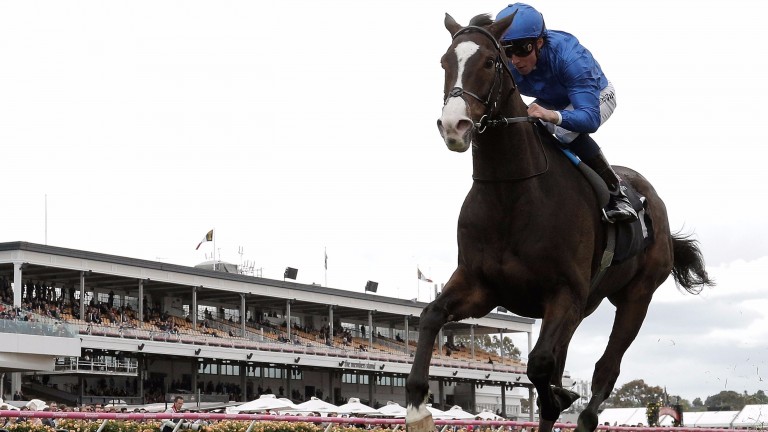 This is one of those snakes-and-ladders races with some older horses on the way down mixing it with younger upwardly mobile types headed by the unbeaten Hamdan Al Maktoum-owned Laraaib.

His owner has had plenty of success in this Group 3 contest going as far back as 1995 with Fahal and most recently with Intilaaq two years ago. Then there was Mutamam, Ekraar and most famously the Marcus Tregoning-trained Nayef in 2001 who went on a run up a five-timer that season including the Group 1 Champion Stakes.

But none of those stars went into this race unbeaten like Laraaib, whose BHA rating has soared from 83 to 103 on the back of three victories.

That still leaves the Pivotal colt a little to find with some of his rivals but trainer Owen Burrows and Sheikh Hamdan's retained rider Jim Crowley are big fans.

Burrows said: "He's done nothing wrong and we feel he justifies stepping up in grade. He's exciting and a big lad to look forward to next year as well.

"He needs to improve again but Dane O'Neill, who rode him first time at Chepstow and then at Ascot after Jim rode him at Haydock, said he felt a different horse as he had improved so much. I've been very pleased with him since Ascot and am looking forward to running him in this Group race."

Age concern
In the 30 runnings of the race there has not been a winner aged over five, which suggests Ayrad, Mount Logan and Spark Plug (all six) plus Francis Of Assisi (seven) can be ruled out.

Three-year-olds have by far the best record with 17 wins in the 30 runnings, including the last two which suggests focusing on four including the unbeaten Laraaib.

Historically runners do not defy a Group 3 winner's penalty in this feature, which counts against the only runner with one –  the Brigadier Gerard hero Autocratic.

Francis Of Assisi, who won over hurdles for John Ferguson and was sixth in the 2016 County Hurdle at Cheltenham, landed two Group 3s in Australia last year but the most recent was in November and the penalties for this race started from Januray 1, 2017.

Chris Richardson, managing director of Cheveley Park Stud, owners of Autocratic
He's in good form and it was a shame he couldn't run at York after he got cast. The ground should be okay for him and we just want to get a run into him.

James Fanshawe, trainer of Arthenus
He ran well at Newbury last time and any rain will help him as he loves slower ground and he seems well.

Richard Fahey, trainer of Gabrial
He wasn't at his best at Pontefract last month but can quickly bounce back from a poor run. He'll need to be on his A-game though, but won't mind the ground.

Roger Varian, trainer of Mount Logan
He's in good form and these conditions should suit him well. He has a good draw and should be very competitive on the pick of his form.

Brian Meehan, trainer of Spark Plug
He was very impressive winning his Listed race last time and we've been very pleased with him at home since. We send him to Haydock with a very big chance and hope he can be just as impressive as last time.

Richard Hannon, trainer of Euginio and Larchmont Lad
Larchmont Lad was disappointing last time. Both Pat [Dobbs] and Ryan [Moore] have suggested he needs stepping up to this trip and the ground should be ideal for him. Euginio looks to be on an upward spiral. I pulled him out at Goodwood because the ground went very soft and I'm hopeful it will remain as it is at Haydock. He's been working well and I'd be very happy if both finish in the first four.

FIRST PUBLISHED 6:00PM, AUG 11 2017
We send him to Haydock with a very big chance and hope he can be just as impressive as last time.