O'Brien happy as Landofhopeandglory out to extend run 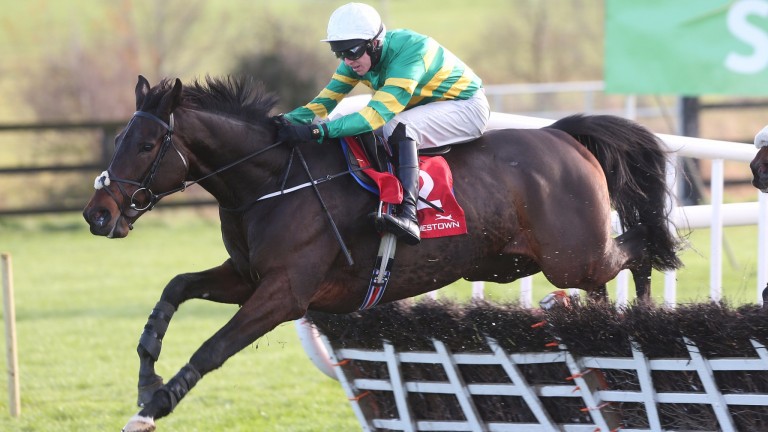 Landofhopeandglory: bids to makes it four from four over hurdles
CAROLINE NORRIS
1 of 1
By Tony O'Hehir 2:13PM, DEC 24 2016

Landofhopeandglory puts his unbeaten record over hurdles on the line as he renews rivalry with Bapaume and Mega Fortune, who were second and third behind him in a Grade 3 at Fairyhouse this month.

One of three runners in the race for Joseph O'Brien, Landofhopeandglory, who is disputing favouritism for the JCB Triumph Hurdle with Defi Du Seuil, is going for four in a row and his trainer reports the son of High Chaparral in "good form".

He said: "We've been happy with him since his Fairyhouse win. He's done everything right over hurdles so far. He handles soft ground but if it got heavy, that would be an unknown.

"Our two other runners, Lord Justice and Zig Zag, have plenty of experience and seem to be in good form."

Willie Mullins, successful with Apple's Jade a year ago, is represented by Bapaume, a seven-length winner of a conditions hurdle at Fontainebleau in April before joining Ireland's champion trainer.

He jumped well at Fairyhouse, apart from a mistake at the final hurdle, and Mullins believes the experience gained there will stand him in good stead.

Mega Fortune, a length and a quarter behind Bapaume in the Fairyhouse race following a 13-length win at Down Royal last month, is given a big chance by trainer Gordon Elliott.

'The bigger field will help'

He said: "Mega Fortune is going there in very good form. I was happy with his run at Fairyhouse. A stronger gallop this time would suit him and I also think the bigger field will help."

Gavin Cromwell, trainer of last year's runner-up Jer's Girl, is represented by recent Fairyhouse winner Prospectus, and Soir De Chantenay, a three-time winner in France before finishing in rear behind Landofhopeandglory at Fairyhouse on his Irish debut.

"We decided to let Prospectus take his chance," said Cromwell. "He's the least experienced in the race having had only the one run over hurdles, but he did the job well at Fairyhouse and went to the line well. Going into the Fairyhouse race we thought he'd come on for the run, and hopefully he has. It's only nine days since he ran, though."

With no Gigginstown House Stud-owned representative in the ten-runner contest, Bryan Cooper is free to partner Do No Complain for his father Tom. Do No Complain makes his debut in Ireland, having won over hurdles and fences in France.

FIRST PUBLISHED 6:00PM, DEC 25 2016
He handles soft ground but if it got heavy, that would be an unknown