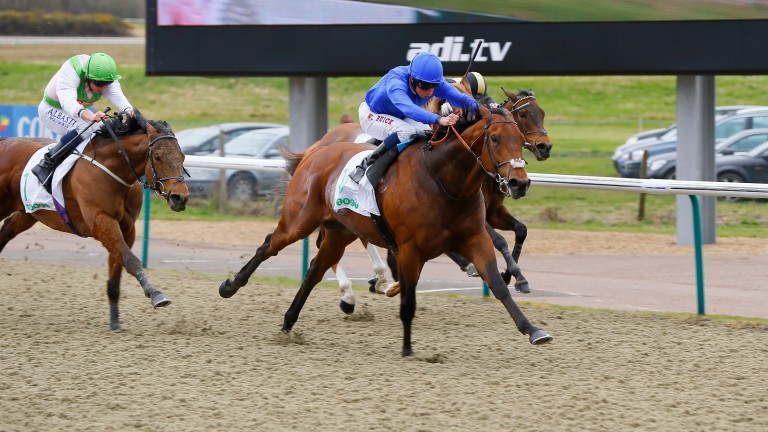 Lancelot Du Lac attempts to become the first horse since 2013 to land the Listed Cleves Stakes and double up in Saturday's sprint feature in the same year.

Just like Ladies Are Forever, the Dean Ivory-trained horse picks up a 3lb penalty for his trouble in a rematch with many of those in arrears that day, including the Godolphin hope Pretend.

Pretend was done no favours by traffic problems in the straight that day and will be bidding to use this as a prep for another crack at the sprint final on Good Friday, which he won in 2015.

Four of the remainder of the field ran in a handicap at Wolverhampton on Monday, when Bowson Fred fared best in second. He was followed by Royal Birth (third), Boom The Groom (sixth) and Sign Of The Kodiac (ninth) in a race in which there were a few hard-luck stories.

Ride Like The Wind , a Group 3 winner in France, is making his debut for Kevin Ryan after selling for €75,000 at Arqana in October.

Pretend, who won this two years ago at 11-10, is the only favourite to have obliged in the past ten years.

Dean Ivory, trainer of Lancelot Du Lac
Everything has been fine with him since his win in the Cleves Stakes last time. We're dropping back to five furlongs, which is a bit on the short side for him, but he needs to run three times to qualify for finals' day and this will be his third run. It looks another hot race, with Pretend in there again.

Tony Carroll, trainer of Boom The Groom
Not much went right for him at Wolverhampton the other day when he got chopped up in his run. He goes there with a chance but Pretend looks tough to beat.

Jim Clarke, assistant racing manager to Godolphin, owner of Pretend
Pretend has come out of his last run in great order. He has proven form on the all-weather. It looks a very suitable race for him. We'd expect him to get a very good account.

Stuart Williams, trainer of Royal Birth
He ran a nice race when he was third at Wolverhampton the other day and it was always in our minds to come to this race after that. He looks up against it off his rating against those rated in the 100s.

James Given, trainer of Sign Of The Kodiac
He had a bad draw when carved up at Wolverhampton on Monday and is drawn nine of nine here, but we'll give it a go. He didn't take much out of himself last time and has a big run in him.

Andrew Balding, trainer of Verne Castle
It's a big step up but he likes the track and has a decent draw. It's important for the owners to get black type for horses from good stock, and we'll look at Good Friday after this.

FIRST PUBLISHED 6:00PM, FEB 24 2017
We are dropping back to five furlongs, which is a bit on the short side for him, but he needs to run three times to qualify for finals' day