Lancaster Bomber a gallant second but Oscar's the leading man 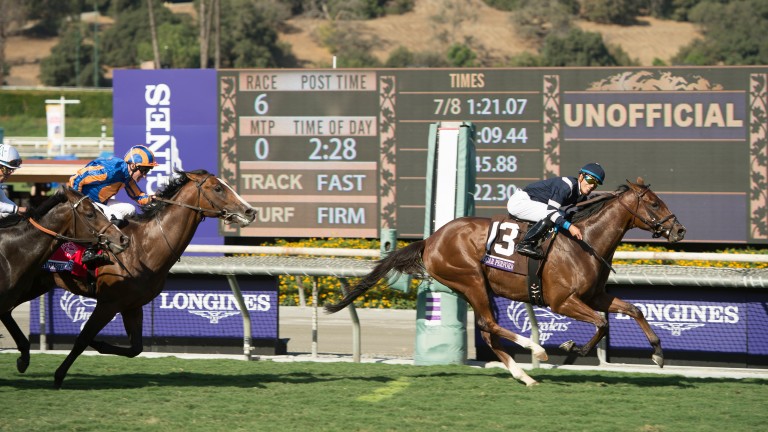 Lancaster Bomber attacked more like a Stuka as he swooped on runaway leader Oscar Performance in the Santa Anita stretch but ultimately he could finish only second, the same position he filled behind stablemate Churchill in the Dewhurst.

He proved that Newmarket performance was no fluke - he had been sent off 66-1 and acted as a pacemaker at Newmarket - and was staying on strongly at the finish under Seamie Heffernan. Aidan O'Brien's other runner, Intelligence Cross, finished eighth, while the Simon Crisford-trained Rodaini came home last.

"He's a fair horse and and a brilliant race," said Heffernan. "I was drawn one and I wasn't as quickly away as the US horses, which the European horses usually aren't. I think I'm as good as the winner – I just didn't have the same trip he had. The run was good, but I would have liked a better position."

Oscar Performance, who made it three wins on the trot and was a first Breeders' Cup winner for trainer Brian Lynch, could be a future runner at Royal Ascot after owner John Amerman mentioned it as an aspiration when collared by the track's industrious international scout Nick Smith before the race.

"Someone came up to me before the race - forgive me, I didn't catch the name, but a wonderful, nice Englishman. He said, 'oh, are you coming to Ascot in the summer?'," said Amerman.

"We'd love to go but that's a long way off. We'll have a few journeys before that. I hope it works, but who knows."

The race's biggest hard-luck story was Good Samaritan, who raced three wide into the first bend and five wide into the second, before steaming home to finish third. Intelligence Cross, ridden by Ryan Moore, didn't fare much better getting blocked on the bend.

O'Brien said: "Ryan was very happy with Intelligence Cross but he made the decision to come out on the bend and didn't get a clear run. We're very happy with the run from Lancaster Bomber, who didn't seem to be finished at the line. He ran a super race and stayed on well."