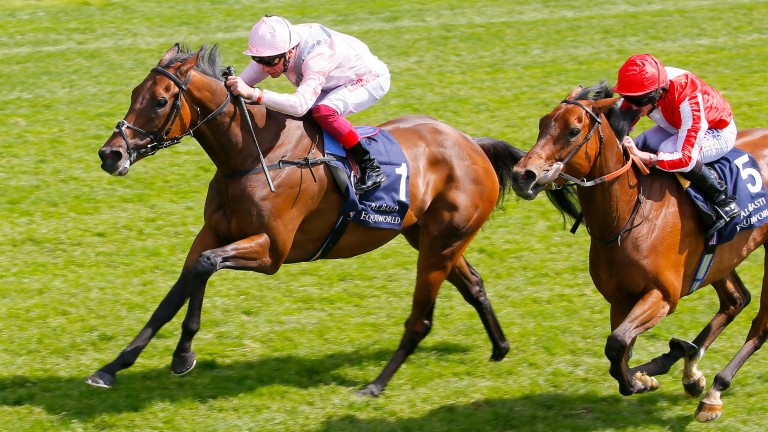 Lah Ti Dar: denies Rawdaa by a neck to make a winning return in the Middleton Fillies' Stakes
Mark Cranham
1 of 1
By Robbie Wilders UPDATED 6:27PM, MAY 16 2019

The high-class Lah Ti Dar produced a workmanlike performance to make a winning return to action at York in the Middleton Fillies' Stakes for John Gosden under Frankie Dettori, prevailing by a neck.

The Sir Michael Stoute-trained Rawdaa mounted a serious challenge to the 1-3 favourite in second, with strong-travelling stablemate Sun Maiden also producing a career-best display back in third.

A pleased Dettori said: "She was a bit rusty. Even going to post she was a bit gassy but she stayed really well."

Owned by Andrew Lloyd-Webber, Lah Ti Dar was dropping down in trip since finishing third to Magical in the Champion Fillies & Mares Stakes last October.

A step up in distance appears likely and Paddy Power responded by cutting the winner to 3-1 (from 9-2) for the 1m4f Coronation Cup at Epsom next month.

FIRST PUBLISHED 2:34PM, MAY 16 2019
She was a bit rusty. Even going to post she was a bit gassy but she stayed really well