Cheltenham News BACK IN BUSINESS

Adam Nicol: hoping to return at Ayr three days before the Cheltenham Festival
martin lynch
1 of 1
By Graham Dench UPDATED 11:51AM, FEB 25 2020

Adam Nicol is targeting a return at Ayr three days before the beginning of the Cheltenham Festival to prime himself for the ride on fans' favourite Lady Buttons at the four-day showpiece.

Nicol was told he might be out of action until the end of March when he injured his back at Sedgefield on Boxing Day, just three months after returning from a broken femur, but his recovery has gone well and he is looking at returning to the saddle at Ayr on March 7.

The jockey, who has been riding out at trainer Phil Kirby's without feeling any discomfort. said: "I rode one on Friday and two on Saturday and I felt good. It was my first time in the saddle since Boxing Day, when my horse fell and I brought two down and got kicked in the back.

"I got what's known as a Chance fracture, a horizontal fracture through the vertebrae. Luckily I never got put in a brace, so I spent a month with my parents, which was good for me mentally, and then in the last few weeks I've been working hard at Jack Berry House – in the gym, on the simulator, in the hydropool and so on. There's no hiding place there and my fitness is good, and so is my weight." 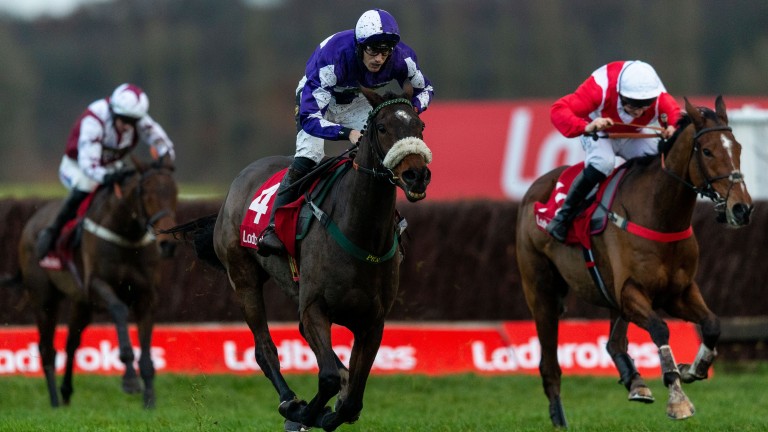 Returning in time for Lady Buttons at Cheltenham has proved a terrific spur to a fast recovery, and Nicol can not wait to get back on board the mare, whether it's in the Close Brothers Mares' Hurdle or the Queen Mother Champion Chase – a choice Kirby intends leaving as late as possible.

Nicol has won on Lady Buttons 12 times and said he was "gutted" at missing the recent winning rides in a Listed chase and a Grade 2 hurdle at Doncaster, the former just three days after the Sedgefield fall.

He said: "I was delighted to see her win, but from a jockeys' point of view it was horrendous and I was gutted. Seeing her in that sort of form has been a great incentive to me though, and I don't mind which race she runs in.

"There's a little doubt about whether she handles the track, but she's versatile over hurdles or fences, and she's effective on heavy ground or good ground. When I rode her in that chase at Newbury [December she was electric and really attacked her fences, and in her last two hurdles she's been very rapid away from the last."

Nicol is due an MRI scan and X-rays on March 4 and in the meantime intends continuing riding out every morning before heading on to Jack Berry House for the afternoon.

He said: "If I get the all-clear following the scan I hope to get one or two rides at Ayr on the Saturday before Cheltenham, weather permitting. Then I'll be good to go either on the Tuesday or the Wednesday, depending upon which race Lady Buttons goes for. I couldn't be happier and I can't wait."

FIRST PUBLISHED 11:26AM, FEB 25 2020
I was delighted to see her win, but from a jockeys' point of view it was horrendous and I was gutted