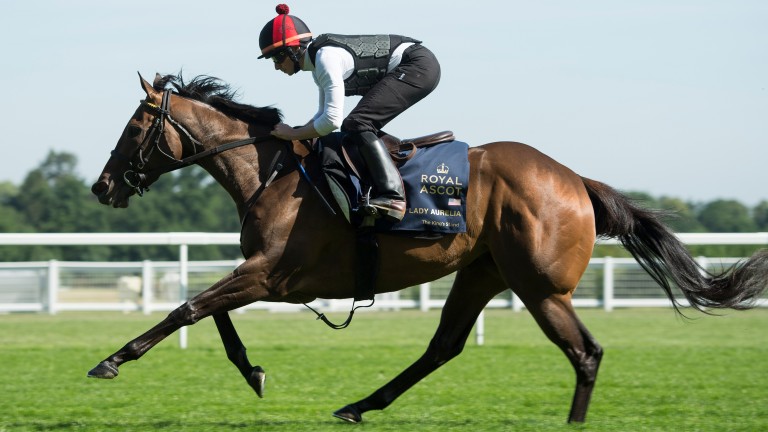 Ryan Moore on Wednesday discovered what he could be up against in next Tuesday's King's Stand Stakes when he answered a late call to put big-race favourite Lady Aurelia through her final paces at Ascot.

Moore, who looks set to ride Coolmore's number-one contender Washington DC, was replacing Lady Aurelia's regular rider Frankie Dettori, who is likely to return action Sunday after spending the last couple of days recovering from a fall in the parade ring at Yarmouth on Tuesday.

Lady Aurelia returned to the track where she blitzed the field 12 months ago to land the Queen Mary Stakes by seven lengths and she put a similar distance between herself and the Commonwealth Cup entry Bound For Nowhere.

Moore, standing in for Frankie Dettori, who was hurt in a paddock fall at Yarmouth on Tuesday having never ridden the filly before, gave little away afterwards, saying: "She has been here before. She worked nicely. It was strong work and she seems in a good place."

But in private he was more effusive, according to trainer Wesley Ward, who said: "Ryan Moore was just going on and on about her. How she was settled in the first part of the work and kicked on when he asked her.

"Lady Aurelia is a little tiger. She walked into the paddock like she had been training here everyday of her life. Ryan said he could have ridden her with two fingers. She kicked off with her ears pricked, then finished up strong. When he said go, she was gone.

"It would be an honour to come back to vindicate last year's championship win and prove that she can really do it at three, not only two. She had a beautiful breeze."

Ward, who worked nine of his ten Royal Ascot runners, was thrilled with the gallops, which were switched to Ascot because the ground was too firm at Newmarket, even though Lady Aurelia's spin did not go entirely to plan.

"There was a little bit of miscommunication there," he said.

"I like to work them together and I told the boy on Bound For Nowhere but he was a little star struck by this place. His mentor Julio Garcia, that rode Bound For Nowhere both starts, has warned him with his life that there is no money in the morning and to just sit there.

"He told me that when Ryan kind of asked and she sprinted away, he pulled even harder because he didn't want to take anything out of the horse."

Ward said Lady Aurelia could contest the Coolmore Nunthorpe Stakes in August if she wins the King's Stand with the Breeders' Cup her end-of-season target.

Although Jamie Spencer and Pat Cosgrave also helped out yesterday the trainer hopes Dettori will be available for most of his runners, with the exception of Coventry-bound Arawak who heads a strong juvenile team.

"A hundred per cent this is the strongest team," said Ward who has had seven royal meeting wins. "The weather is always a question and by the forecast there shouldn't be any worries. Going into these races I'm more confident than I've ever been.

"Frankie will ride nearly all of them but Johnny Velazquez, who won on Arawak, is coming to ride him. He did the best work I've ever seen him do, which shows that he really likes the course."

FIRST PUBLISHED 3:32PM, JUN 14 2017
Ryan Moore was just going on and on about her. How she was settled in the first part of the work and kicked on when he asked her