No entries for Australia and Hong Kong as overall numbers fall 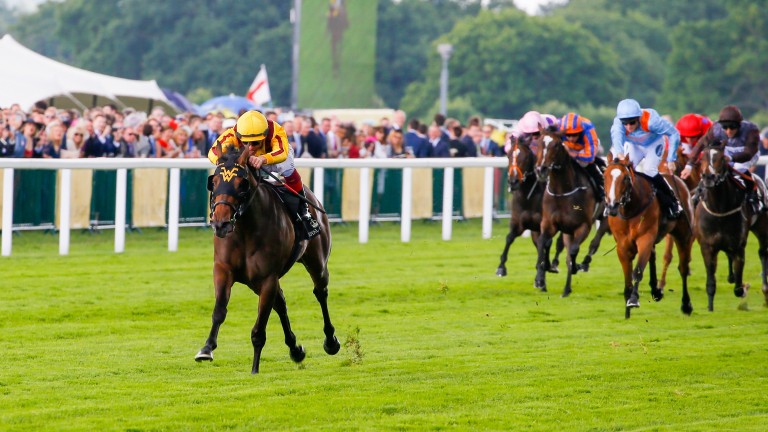 The three-year-old made a winning return to action in a Keeneland Listed contest this month and Ward reported her to have come out of that start in fine order.

"We are leaning towards the King's Stand Stakes as she is most effective at five furlongs," the trainer said. "She ran lights out the other day in her race at Keeneland and I am excited to get back over to Royal Ascot with her."

Ward could still be represented in the Commonwealth Cup by the unbeaten Bound For Nowhere, while 2015 Diamond Jubilee Stakes hero Undrafted could return for the Wokingham Handicap.

Last year's opening Queen Anne Stakes went to the US courtesy of Tepin and while that mare will not be defending her crown having been retired, the Americans could be well represented again.

The Todd Pletcher-trained four-year-old American Patriot, a Grade 1 winner most recently, is one of two US entries in the race, along with Royal Ascot regular Miss Temple City.

A total of ten American-trained horses hold entries, including Long On Value, who could be handed the chance to avenge his Al Quoz Sprint defeat at the hands of France's The Right Man in the Diamond Jubilee Stakes.

French hopes are set to be strongly represented throughout the meeting, with Solow entered for a bid to regain his Queen Anne Crown, while superstar Almanzor is lined up for a clash with the likes of Minding and Hawkbill in the Prince of Wales's Stakes.

The number of nations due to be represented is lower than any year since 2006. The 146 entries, of which 41 come from France, from overseas is down on last year's record 164. Only four nations outside Britain are represented, compared to eight last year and a high of 11, achieved in 2010 and 2013.

Australia is among those nations with no entries, for the first time since 2003, with the likes of Hong Kong and Japan also blank.

"We are pleased with the strong entries for the eight Group 1 contests this year, including a high-quality US contingent," said director of racing Nick Smith.

Addressing the drop-off in Australian entries, he said: "There is certainly no sign of any reluctance to come or change in the interest while I've been going out there. It just so happens that the key horses we were looking to have all failed to come through their programme.

"The reality is, when horses like Choisir came over, they were very, very good sprinters who made it seem quite easy. A lot of the sprinters coming over recently haven't found it quite as routine, so there is definitely a sense now that in order to come, you have to be the elite, champion, stand-out sprinter."

FIRST PUBLISHED 3:43PM, APR 26 2017
She ran lights out the other day in her race at Keeneland and I am excited to get back over to Royal Ascot with her