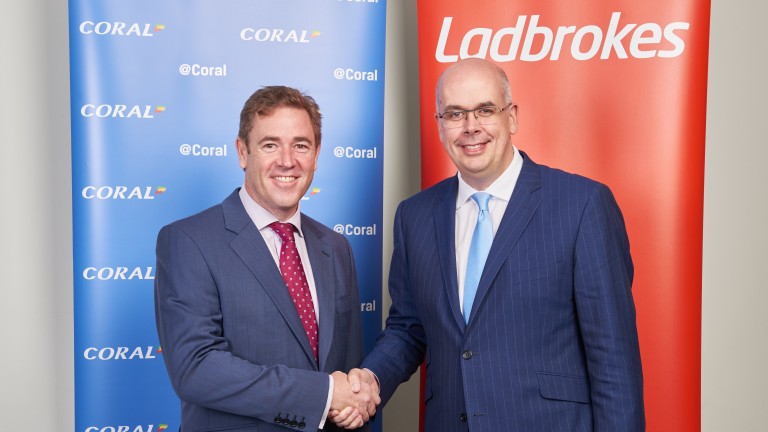 The £2.3 billion merger between Ladbrokes and Coral could be completed early next week after the competition watchdog gave its final approval to the deal on Wednesday.

It is understood Ladbrokes Coral plc could begin trading on the London Stock Exchange as early as Tuesday following the Competition and Markets Authority's (CMA) announcement.

The CMA had said the two firms must sell 360 betting shops to meet its competition concerns.

Earlier in October it was announced Betfred were to buy 322 of those shops for £55 million, with Stan James taking 37 shops for £500,000. It was revealed on Wednesday that the one remaining shop had been bought by a new operator called Bet 21.

Ladbrokes are now required to publish a prospectus which must remain available for five days after which the merger can complete.

A statement from Ladbrokes said they expected completion of the merger would "take place in the very near future".

Chief executive Jim Mullen, who will retain that position in the merged company, said: "I am delighted the CMA has given approval to our merger with Coral.

"Both businesses are approaching the merger with good momentum and we are now focusing on completing the merger and delivering on the opportunities it offers."

Ladbrokes' chairman John Kelly will remain in that post after the merger, with Gala Coral chief executive Carl Leaver staying on as executive deputy chairman for 12 months after completion.

Leaver said: "The final hurdle has now been cleared and we can begin to realise the significant value available to both company’s shareholders."

The merger between Ladbrokes and Coral is the latest in a wave of consolidation in the sector following the creation of Paddy Power Betfair and GVC Holdings' purchase of bwin.party.

Analyst Gavin Kelleher of Goodbody said although regulatory concerns had weighed on the share price recently, they continued to like the Ladbrokes investment case.

He said: “The online growth trends in 2016 have been very encouraging and the merger with Coral will bring greater online exposure, a strong management team, significantly greater scale and £65m of cost synergies.”