La Estrella returns to favourite course at age of 14 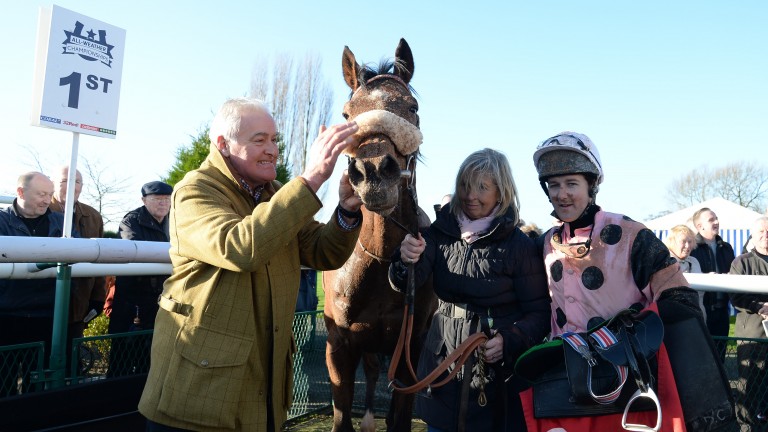 La Estrella and Southwell, Posh and Becks, even Beyonce and Jay Z – they have their moments but all in all they are a match made in heaven.

At the age of 14, Don Cantillon’s stablestar returns to his favourite track, where he has notched 16 of his 27 all-weather wins, after a 409-day absence in the 2m handicap.

A recent morning on the Links, where La Estrella more than held his own alongside a filly who has subsequently been sold to Willie Mullins, told Cantillon everything he needed to know.

Cantillon said: “He was retired but I’ve been using him as a hack and he’s as lively as ever. A few weeks before I ran a filly at Warwick called True Self, who finished second, I ended up galloping her with La Estrella as the other bumper horse went lame on the way to the Links.

“Lo and behold, with a hunting saddle on La Estrella, the filly could barely get upsides him. He’s still got his racing head on and is so buzzy on the Heath – he’s uncivilised really.”

John Butler’s 13-year-old Stand Guard regained the title as winning-most all-weather horse at Kempton last month following a 28th victory, but Cantillon has no intention to try and take back top spot with La Estrella, who faces the four-timer-seeking Start Seven in the eight-runner £7,500 handicap.

Cantillon said: “As soon as I saw Stand Guard win at Kempton I accepted John’s horse had a stone in hand. Stand Guard will be all-weather champion but that doesn’t bother me.

“I just spotted this race, he’s an old plodder and he likes going to Southwell so we thought we’d have a day out. He’ll love it and if by some miracle he manages to finish fourth he might just pay for the diesel.”

FIRST PUBLISHED 6:00PM, FEB 9 2017
He’s still got his racing head on and is so buzzy on the Heath - he’s uncivilised really