No favourite has won this for more than a decade and this looks a typically hard race to solve with bookmakers having three co-favourites at around 5-1, including the Richard Hannon-trained Kuwait Currency.

The three-year-old opened up new doors when winning a qualifier for this on his first start on Polytrack over course and distance last month.

Hannon, who won this 12 months ago with recent Chelmsford City Cup winner War Glory, is expecting more from Kuwait Currency who is certainly bred for the synthetics being a son of Kitten's Joy.

He said: "Our perseverance with Kuwait Currency finally paid off as he managed to win over course and distance last time but the handicapper has whacked him back up to 94 so I’m not convinced he’s that well treated to follow up here. However, he’s in good form and that win will have done his confidence a lot of good so you never know!"

King's to give them the Slip-per

King's Slipper could finish only eighth when well fancied to win this a year ago but won a qualifier in April and is back for another go.

The Clive Cox-trained four-year-old has not run since posting a modest effort in June but is the sort who goes well fresh and could be a big player under Hector Crouch.

Cox said: "King's Slipper has had a break and as he's the sort of horse who goes well fresh and he goes there with a nice chance. He's shown some good form at this track in the past and we're sticking to what is tried and tested."

Connections of Kasbaan are not averse to a tilt at a decent handicap and are back with their recent purchase just five days after he won the final qualifier.

Formerly trained by Owen Burrows, the four-year-old was picked up for 20,000 guineas at the Tattersalls July Sales by The Horse Watchers and is now in training with Mick Appleby.

Kasbaan picked up a 5lb penalty for his defeat of Al Jellaby on Tuesday and should go well if that performance has not left its mark.

Syndicate member Chris Dixon said: "We’d expect him to improve for the run on Tuesday overall but whether this comes a bit quick we’ll find out – we don’t know one way or the other.

"The plan was always to get him qualified for the final by running on Tuesday and then turning him out quickly given the value of the race. He seems to have come out of it looking well but we’d have preferred a lower draw. He’s a nice horse and should progress further."

Roger Varian, trainer of Motawaj
He banged his head on the stalls last time which is why he didn't run very well but is fine again now. As a course and distance winner he should have a good shout.

Gary Moore, trainer of Gossiping
He likes the track and his handicap mark on the all-weather is lower than that on turf so that's also in his favour, but it just depends if he's feeling the effects of a hard campaign. 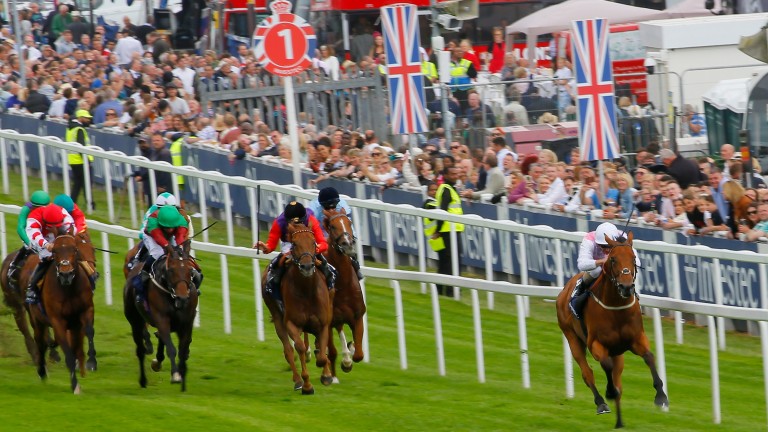 Gossiping: ran out an easy winner at Epsom in May
Mark Cranham

Charlie Fellowes, trainer of Freerolling and Mayfair Spirit
Freerolling is still a bit inexperienced but the draw has not been kind to him so the faster they go early the better. On the other hand, Mayfair Spirit is well drawn and should be bang there. He's been a superstar already for us this year.

William Jarvis, trainer of Arigato
He has a nice draw and has been pretty consistent this season. He should be competitive and has an each-way chance.

FIRST PUBLISHED 6:00PM, SEP 6 2019
Our perseverance with Kuwait Currency finally paid off as he managed to win over course and distance last time