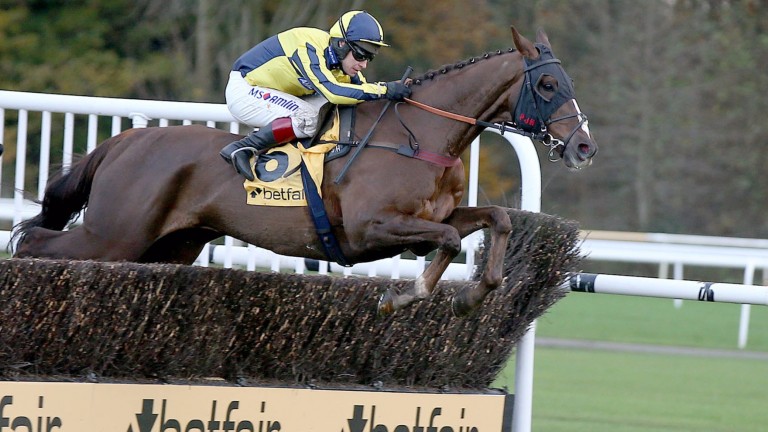 Kruzhlinin: in winning form in the fixed brush final at Haydock in November
John Grossick
1 of 1
By Bruce Jackson 6:00PM, JAN 13 2017

Kruzhlinin tries to repeat his win in this competitive staying chase and warmed up back over the fixed brush hurdles at Haydock in November having seemed to lose his confidence when jumping the big fences in the Grand National last term.

Volnay De Thaix takes a drop in class after finding himself taken off his feet in the shorter Peterborough Chase behind stablemate Josses Hill.

Top of their league

Chris Gordon has rewarded his followers at the track with big profits in the last five seasons and he runs Carloswayback here.

Nicky Henderson, trainer of Volnay De Thaix
They were always just going too quick for him in the Peterborough, but like the others behind Josses Hill, who is a two-mile-four horse, he looked like a 3m chaser which he can show now.

Jason Maguire, racing manager to Paul and Clare Rooney, owners of Kruzhlinin
He has done well, winning back over hurdles last time having lost some confidence chasing. Hopefully he can get his form back over fences in the race he won last year on what is his only previous run at the track.

Tom George, trainer of No Duffer
He's in good form but doesn't want the ground too soft. Good to soft will be all right and after this he will start to go into veterans' races.

Charlie Longsdon, trainer of Our Kaempfer
We hoped he would run well in the Rowland Meyrick so being an early-fence casualty was frustrating. On his top novice hurdle form he would have a good chance, but he wouldn't want the ground to get much worse.

Anthony Honeyball, trainer of Chill Factor
He's back from a break and we are very happy with him. It's probably asking quite a lot, but he has a reasonable chance if all goes well. I'm delighted to have him back racing and see him sound - we can use this race as a building block.

Ben Pauling, trainer of Silvergrove
He's been a bit quiet in the early part of the season and was never really going in the Becher for all he finished mid-division. My assistant Mary [Vestey] rides him out every morning and says he's back where we'd like him to be. If he's back in the sort of form as when he ran in the Kim Muir then he'd have a right chance.

Colin Tizzard, trainer of Sandy Beach
He won well at Newbury last time and this is his type of race.

FIRST PUBLISHED 6:00PM, JAN 13 2017
Hopefully he can get his form back over fences in the race he won last year on what is his only previous run at the track