Knocknanuss bids to strike for locals in 'Plumpton Arkle' 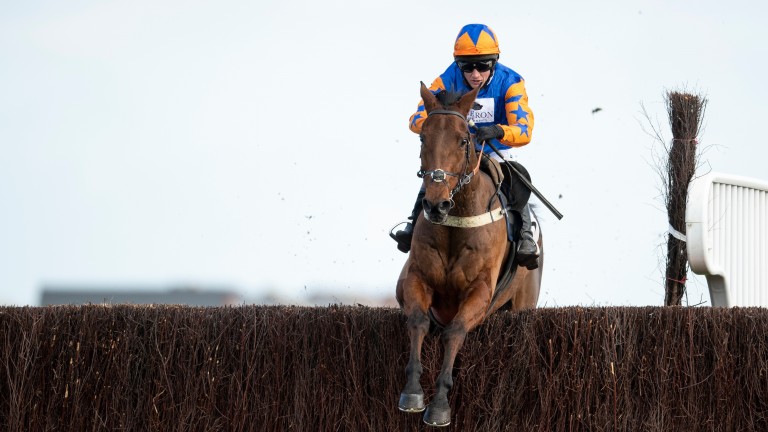 With top-class challengers from England, Ireland and France, local Sussex trainer Gary Moore is hoping to prevail on home soil in the race he describes as the Plumpton Arkle.

The 2m3f novice chase is a thrilling spectacle with Gordon Elliott sending Glenloe to Sussex, former Grade 2 winning hurdler Slate House making his chasing debut and multiple Graded-winning French raider Master Dino coming over from France. But if anyone knows Plumpton it is Gary Moore.

Based just half-an-hour from the track, smart Newbury scorer Knocknanuss will represent Moore and have home advantage.  The nine-year-old has dominated from the front to win comfortably in his last two starts but faces better opposition here.

Moore said: "It is a bit like the Plumpton Arkle! Our horse won really well last time but the form hasn't worked out that great to be honest. He couldn't have done it any better, so fingers crossed he can do it again.

"He has had plenty of time between races and I couldn't be more pleased with him at the moment. Let's hope there are a few problems in Calais [for Master Dino] to make it a bit easier for me."

The race is another leg of Plumpton's Cheltenham bonus scheme, whereby if a horse can win one of the set novice races before landing Festival success they will scoop a £60k added prize.

Of a potential bonus bid, Moore added: "We will worry about that after this race. We need to find out if he is good enough to get there first."

Gordon Elliott has his first representative at Plumpton in the form of Glenloe, who makes his chasing debut on the south coast. On his only visit to Britain the eight-year-old was touched off by Delta Work in the Pertemps Final at Cheltenham.

Frank Berry, racing manager to owner JP McManus, said: "Gordon's been happy with his jumping at home but we've been struggling to get him out because of the ground in Ireland. Hopefully he'll get a bit of the soft ground that he loves and he's heading to Plumpton in good form."

McManus also owns the Harry Fry-trained challenger Onefortheroadtom and Berry added: "It's a good race but he's needs to get back on track because he's been disappointing over fences so far. We'll make make a decision about whether he goes back over hurdles or not after this."

Slate House, who won a Grade 2 at Cheltenham over two miles by three-quarters of a length from subsequent Supreme winner Summerville Boy last season, is also given his first test over fences.

Joe Tizzard, assistant and son to trainer Colin, said: "It looks a hot race on paper. He has been off since Aintree but he has schooled well at home. Don't get me wrong, he is a good horse, so hopefully he can have a nice run, but it looks a tough race to start him in."

Alan King, trainer of Good Man Pat
Good Man Pat makes a belated start over fences in the novice chase at Plumpton. He’s a winning point-to-pointer who scored a couple of times over hurdles last season and, though he’s had a few little setbacks this autumn, he’s ready to run now. He’ll get further but this 2m4f trip is a good starting point. It looks like being a hot contest but I need to get him started.

FIRST PUBLISHED 6:00PM, JAN 5 2019
Let's hope there are a few problems in Calais [for Master Dino] to make it a bit easier for me