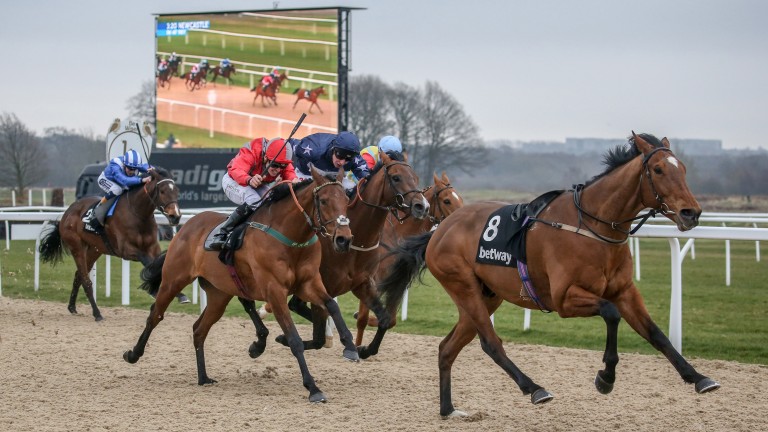 Stargazer (Kevin Stott, nearside) just gets the better of Island Brave (Luke Morris, navy) at Newcastle on Good Friday before being demoted by the local stewards
GROSSICK RACING 07710461723
1 of 1
By Graham Dench 4:42PM, APR 19 2018

Phil Kirby has no doubt enjoyed better birthdays, but while his appeal over the demotion of his Good Friday winner Stargazer was dismissed by the BHA's disciplinary panel on Thursday, he hopes to quickly put the reverse behind him.

Stargazer, bought out of Sir Michael Stoute's stable after a year off the track for just 8,000 guineas at Tattersalls in October, is among the favourites for next month's 188bet Chester Cup at a best-priced 16-1, and Kirby fancies his chances.

Newcastle's Betway Handicap, with a penalty value just short of £55,000, was by some way a career highlight in terms of race value for Kirby, who has trained 277 winners since taking out his licence in 2007. He felt he had to appeal after the race was awarded to nose runner-up Island Brave, who in monetary terms was a similarly significant winner for Heather Main.

Kirby, 39 on Thursday,  said: "I thought we had a chance, and although it didn't work it was fair enough to have a go. It wasn't the result we wanted but it was fair for everyone."

See the replay for yourself, with full result and analysis

The appeal got off to an inauspicious start when it emerged that, as formal proceedings were due to begin, Stargazer's rider Kevin Stott was stuck on a train at Grantham, well over an hour from the BHA's High Holborn headquarters.

It was always going to be a difficult day for Stott, who had two booked rides at Ripon for Kevin Ryan, the first at 2.15, and was then set to travel on to Newcastle's evening meeting for three more. But the inquiry went ahead in his absence since he was not contesting his two-day careless riding ban and did not intend to change the evidence he gave at Newcastle.

Kirby admitted "it didn't help", but preferred to look ahead and said: "We'll just have to win the Chester Cup now to pay the bills. He goes straight there, and fingers crossed he'll run well. I don't think the trip will be a problem and the track will suit him because he's not slow."

Main, originally from Alabama and a trained opera singer who made headlines last year for singing to her horses, was relieved at the outcome.

She said: "I found it all nerve-racking, as you can't assume anything." 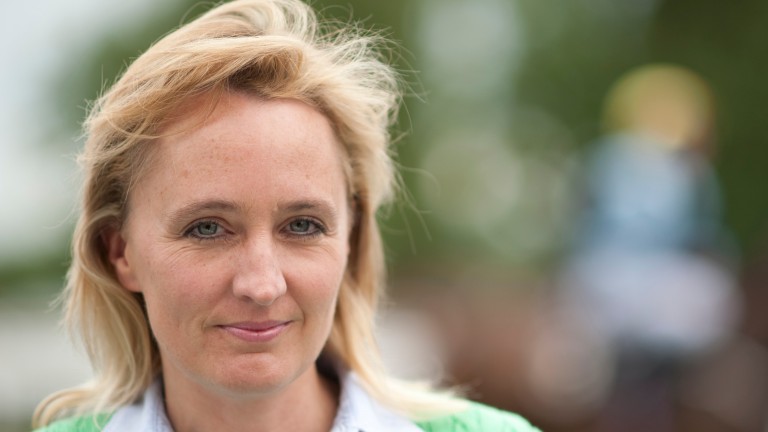 Main, too, has her eyes on a big handicap, and understandably too, as Island Brave's rating has rocketed from 74 to 100 on the all-weather since he came under her care last autumn.

She said: "He's had a break and we're now targeting a race a month for him, leading up to the Ebor, if we can get him in."

A loose horse complicated the Newcastle finish, but Luke Morris, who rode Island Brave, confirmed the interpretation of events he gave to the Newcastle stewards while film of Stargazer leaning in under a right-hand drive was shown repeatedly and examined in minute detail.

Morris stressed that while he did not have to stop riding he lost forward momentum by being carried several horse widths to his left, and that when forced to change his whip hand by the outside pressure in order to go to the inside of the loose horse his mount changed leads. Had he been able to maintain his straight course, it was claimed, Island Brave would have got to the line sooner, and the margin was just an inch or two.

Morris left for Newmarket before the verdict, but told the panel: "For me, it's not even a question. It's quite clear. My horse would have won without interference, without a doubt."

FIRST PUBLISHED 4:42PM, APR 19 2018
For me it's not even a question. It's quite clear. My horse would have won without interference, without a doubt