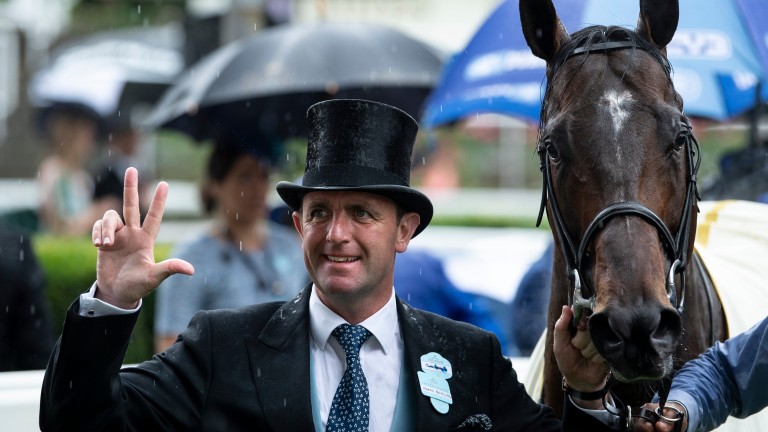 Charlie Appleby celebrates with Blue Point after the King's Stand Stakes on Tuesday
Edward Whitaker
1 of 1
By Peter Scargill UPDATED 11:41AM, JUN 20 2019

Blue Point, brilliant winner of the King’s Stand Stakes on Tuesday, could bid to land the Group 1 sprint double at Royal Ascot on Saturday in the Diamond Jubilee Stakes.

The Godolphin five-year-old defeated Battaash and Mabs Cross for a second year running in the 5f King’s Stand Stakes, his third win at the top level and his fourth from five runs at Ascot.

Such a fondness for the royal course could result in Blue Point being given the chance to emulate Choisir’s unique achievement of winning the King’s Stand Stakes and Diamond Jubilee in the same week.

The ground was officially good when Blue Point won the King’s Stand Stakes and rain has subsequently turned the ground on the straight course to soft.

However, trainer Charlie Appleby indicated softer going was less of a concern after Tuesday’s win and added after the race that Blue Point was in the "condition of his life".

Appleby was weighing up his options on Wednesday and said: “Blue Point’s in the Diamond Jubilee so we’re thinking about it. His Highness Sheikh Mohammed is here so we’ll discuss it with him and take into account what he thinks about his condition. It’s a possibility for him, yes.”

Blue Point was cut to 4-1 (from 6) for the Diamond Jubilee after his win on Tuesday. Invincible Army heads the betting at 7-2 for the Group 1, for which declarations are made on Thursday morning.

FIRST PUBLISHED 4:50PM, JUN 19 2019
Sheikh Mohammed is here so we'll discuss it with him and take into account what he thinks about his condition. It's a possibility for him, yes

'Indistinguishable handicaps are not enhancing the royal meeting' 'He looks capable of winning a big prize over a mile this season' 'She has everything you need to win an Arc and is a generous price' Crowds down but enough people to fulfil Ascot's role in government's ERP test Doyle Force: Creative rider off the mark for the week as Appleby bags a 1-2 'I didn't say that. He's wrong' - Dettori counters Murphy best-horse claim