King out to nab Flat laurels with three-pronged assault 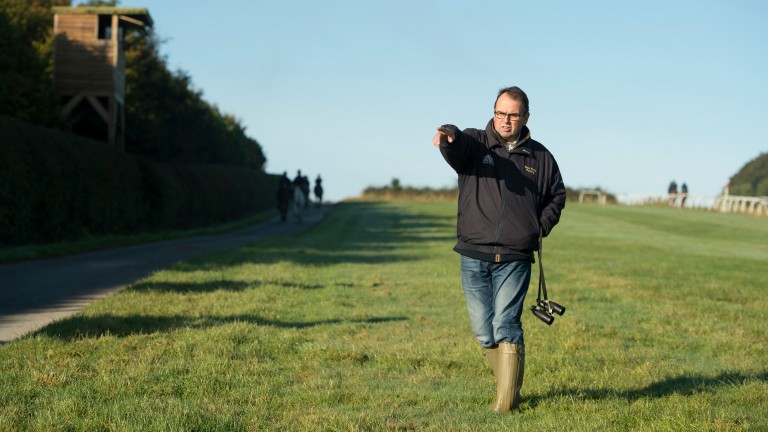 Alan King has three to fire at the Betfred Cesarewitch Trial
Edward Whitaker (racingpost.com/photos)
1 of 1
By Mark Storey 6:32PM, SEP 22 2017

Alan King knows all about winning at Cheltenham, but the leading jumps trainer likes Newmarket too and has his eyes fixed on the Betfred Cesarewitch Trial (3.10), in which he saddles three runners.

Grumeti won the Cesarewitch for the yard in 2015 and Coeur De Lion, 16-1 for the next month’s big handicap, is arguably the most intriguing of his three chances in the £50,000 contest.

Seventh behind Defi Du Seuil in March’s Triumph Hurdle, Coeur De Lion, the mount of Hollie Doyle, has not been sighted on the level since winning at Nottingham in May.

King said: “Coeur De Lion ran a stormer at the Cheltenham Festival, only flagging going to the final flight. He would be fine on the prevailing good to soft ground and would actually appreciate more rain falling, being a confirmed mudlark. He won well in the soft at Nottingham in May and has enjoyed a summer break.”

Who Dares Wins is back over a more familiar trip after disappointing last time. King said: “His stamina is proven as he’s already finished third in an Ascot Stakes and fourth in a Chester Cup this season.

"He’ll relish going back up in trip, having been unsuited by a slowly-run race over a shorter distance at Chester last time.”

Oceane finished ninth when favourite for last year’s Cesarewitch Trial and King hopes the rain stays away. The trainer said: “He was beaten little more than three lengths at York last time. The more the ground dries up the better.”

Dangers abound and Tony Martin is expecting better from The Graduate on his first start on the Flat for the trainer since arriving from Andrew Balding. He said: “He seems in good form and should appreciate the trip, so we're expecting him to give a good account.”

The waterlogged home straight wrecked Eve Johnson Houghton’s raid on the Ayr Gold Cup with Ice Age, but she is hoping for compensation in Newbury’s £75,000 Dubai Duty Free Handicap (3.25) with Silver Ghost, who she describes as her best chance of the day among several good ones.

“It’s a bummer about Ayr,” said the trainer, who is approaching 50 winners in her best season yet. “I didn’t think we were going to get in with Ice Age, we did, and then it gets cancelled.

“But I think Silver Ghost is improving and he should go close. I think he’s just matured.”

Silver Ghost has gone up 21lb since joining Johnson Houghton and after completing a hat-trick at Sandown, was only beaten two lengths by Thundering Blue back at the track last time.

The trainer also runs bottomweight Reaver in the 1m2f contest. She said: “He’s just snuck in there. He’s Mr Consistent and if the race is run to suit him, he should be there or thereabouts.”

On her season she added: “The horses have been healthy all year. I’ve got more of them and they’re probably a little bit better.”

A big threat to the Johnson Houghton plan is the Sir Michael Stoute-trained Fidaawy, who came to the boil at York last time.

Angus Gold, racing manager to owner Hamdan Al Maktoum, said: “He won well at York and is a horse that seems to like galloping track so I think this will suit. He has plenty of ability if he can get into a rhythm – he is not a stop-start horse.”

The loss of Ayr’s meeting means the ITV4 cameras are at Newmarket for three races and the International Stud Book Committee Handicap (2.00) could be the unlikely platform for Manuel Fernandes to shine.

The apprentice has a 22 per cent strike-rate and a level-stakes profit this year and has the chance to boost his profile on The Statesman in the 1m2f contest, which is the first live race being shown.

He takes over from Jim Crowley on the Ian Williams-trained three-year-old, a winner at Sandown on Wednesday who carries a 6lb penalty.

Trainer Ian Williams said: “Manuel has been doing very well. He’s got a sensible head on his shoulders and is worth his 7lb claim. This is more competitive, but The Statesman has come out of Sandown well.”

'We're building up the Flat team - it was a huge mistake not to do it sooner' Our top tipster fancies an upset in decent Newbury contest The Placepot: two bankers to help you pinch a part of the Newbury pot