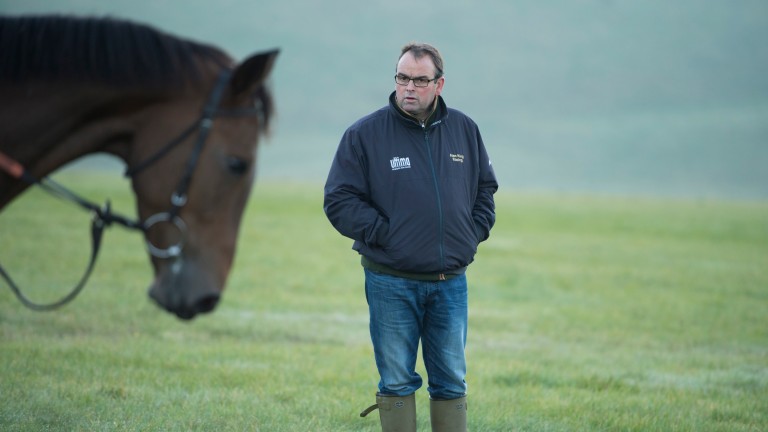 Alan King: has been saving Annacotty for Cheltenham
Edward Whitaker
1 of 1
By Keith Melrose 6:11PM, NOV 2 2016

Last year's winner Annacotty will be aimed at the BetVictor Gold Cup at Cheltenham on Saturday week with his trainer Alan King believing keeping the horse fresh is key to his chances.

Annacotty has been allotted 11st 8lb, the equivalent of a BHA mark of 156, for the 2m4f contest, which would rise should neither of the topweights, Irish Cavalier and Top Gamble, line up.

King said: "It's the plan to go for the BetVictor Gold Cup again with Annacotty. He's well and in good form. We'd like to see a drop of rain before next weekend.

"He's better fresh, so it was always the plan to go straight to Cheltenham again with him."

Former World Hurdle winner More Of That, who will carry 2lb less than Annacotty, is generally favourite and a best-priced 10-1 with the sponsors, while King's Socks and Paul Nicholls' four-year-old novice Frodon are lurking towards the foot of the weights.

Bidding for a repeat

Like Annacotty, Cue Card will also be bidding for a repeat win on his next start after featuring among 22 entries for the Betfair Chase on November 19.

The ten-year-old went on to land the King George VI Chase before falling three out in the Timico Cheltenham Gold Cup and missing out on a £1 million bonus from the Jockey Club for winning all three races.

Coneygree is a possible opponent to Cue Card at Haydock, as he is at Kempton after he was one of 33 entries made for the 32Red-backed King George. Willie Mullins has entered Vroum Vroum Mag, Douvan, Avant Tout and favourite Vautour at Kempton, but has no Betfair Chase entries.

FIRST PUBLISHED 6:11PM, NOV 2 2016
He's better fresh, so it was always the plan to go straight there