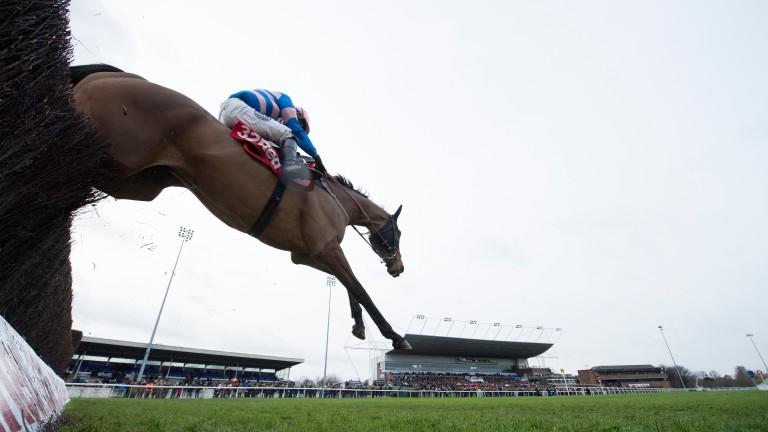 Cyrname produces a sparkling round of jumping to win the Grade 2 Wayward Lad Novices' Chase
Edward Whitaker
1 of 1
By Maddy Playle and Stuart Riley UPDATED 9:45AM, DEC 29 2017

Of the last eight winners of the Grade 2 Wayward Lad Novices’ Chase, the lowest-rated performer – Grade 1 winner Vibrato Valtat – went on to record a BHA rating of 162.

Cyrname, who came in to this rated 139, may not be up to that standard, but he produced a faultless round of jumping to gallop his rivals in to submission for Paul Nicholls and Sean Bowen.

The 7-4 second favourite led throughout jumping smoothly, with the strong-travelling Shantou Rock – who was sent off the 6-4 favourite – in second. Stablemate Tommy Silver jumped a little slow in third ahead of rank outsider Kostaquarta, who was always outpaced.

Turning in Cyrname had just a length lead over Shantou Rock, but he clearly relished the testing conditions and it was soon obvious Shantou Rock had no more to give. A superb leap at the last sealed a convincing victory.

Nicholls, who recorded a Grade 1 success with Black Corton on Boxing Day, said: "He's a proper horse now. Over hurdles he was too keen but letting him bowl along in front and allowing him to use his jumping is ideal.

He added: "We learned at Newbury he is better going right-handed, so we'll probably look at races like the Pendil and Scilly Isles."

Ladbrokes and Coral make Cyrname a 25-1 shot for the Racing Post Arkle Challenge Trophy Novices' Chase at the Cheltenham Festival.

Alan King won a fourth 32Red Casino Introductory Juvenile Hurdle in the last ten renewals with Redicean, who earned quotes ranging from 14-1 to 25-1 with William Hill, Paddy Power and Betfair for the JCB Triumph Hurdle at Cheltenham in March.

The 11-8 favourite travelled strongest and eased to the front jumping the last. He pulled clear of Haulani on the run-in with the two coming well away in very testing conditions.

King suggested after the race that the Chatteris Fen at Huntingdon could be Redicean's next target.

"I thought coming here he could be decent," he said. "Those weren't ideal conditions for a horse making his jumping debut, so I'm really pleased with what we saw today.

"I hope we can find a Triumph horse and this one is in the mix. He would need two more runs before Cheltenham for experience, though."

FIRST PUBLISHED 1:00PM, DEC 27 2017
He's a proper horse now. Over hurdles he was too keen but letting him bowl along in front and allowing him to use his jumping is ideal

'Horses make a fool of you' - Angel Bleu makes quick reappearance a winning one First Group 1 for Alan King as Trueshan relishes conditions in Goodwood Cup Would you side with Snowfall or Love if they go head-to-head? Sublime Snowfall records biggest winning margin in Irish Oaks for over 100 years Japan just does enough to bag the Meld Stakes at Leopardstown