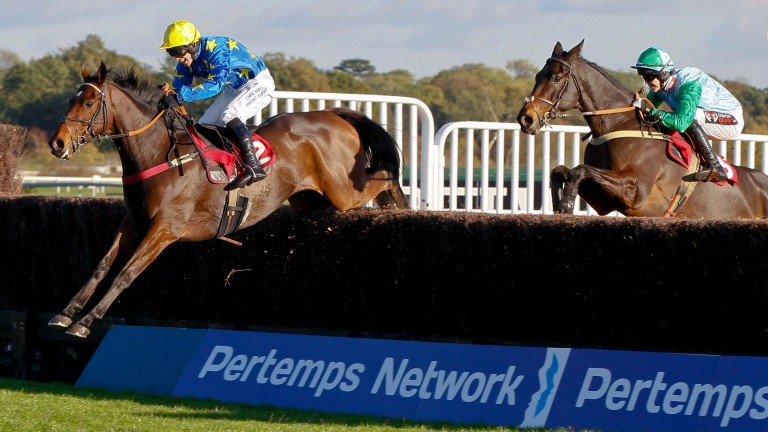 Alan King is hoping for some rain ahead of Annacotty's bid to win this £60,000 prize for the third year in a row.

Andy Stewart, who is sponsoring the prize, will try to win his own money with Saphir Du Rheu, better known as a three miler, who has his first start since falling in the Hennessy.

Alan King, trainer of Annacotty
He’s been disappointing this season, but we hope his little holiday will have freshened him up. They are talking about rain in the morning which would help him as he has not really had the soft ground he needs this winter.

Paul Nicholls, trainer of Saphir Du Rheu
He fell in the Hennessy and that was the end of the story. He had run well at Ascot the time before that. Two miles five is sharp enough for him but Andy is sponsoring the race so we thought we would run him.

David Pipe, trainer of Ballynagour
It's a lot to ask but he is very talented. He is in good form at home and has been a bit unlucky in his last few runs. Especially last time out when he was nearly brought down.

Venetia Williams, trainer of Aso and Tenor Nivernais
Aso has been running well this season and has climbed up the handicap as a result. I hope he runs a good race again. Tenor Nivernais is also entered at Doncaster, but Cheltenham is the first preference. We are looking at overnight rain at the two venues, and Cheltenham could get a drop more. He has done much of his racing at Cheltenham over the last two seasons, and the ground is important to him.

Anthony Honeyball, trainer of Regal Encore
It's probably a bit short of his best trip but he's been plated up to run for the past two weeks and hasn't and we are desperate to get a run into him. He's been fine since Ascot but wouldn't want too much rain and we'll use this as a prep for his spring targets such as the Irish National.

Evan Williams, trainer of Buywise and On Tour
Buywise has run badly the last twice but he has run some great races around there so let's hope he can run another good one. On Tour ran well last time. We think the step up in trip might help him.

Nigel Twiston-Davies, trainer of Foxtail Hill
Foxtail Hill won very well at Kempton last time despite jumping to the left. He will enjoy Cheltenham more as it is a better way round but the handicapper has given him a good smacking as well so we're not as confident as we would have been.

FIRST PUBLISHED 6:00PM, JAN 27 2017
He’s been disappointing this season, but we hope his little holiday will have freshened him up