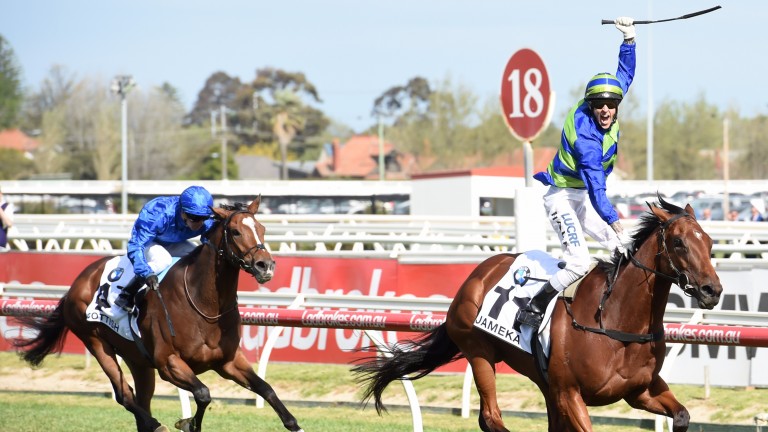 Caulfield Cup winner Jameka could compete in Europe this summer with the King George VI and Queen Elizabeth Stakes as her main target.

The Australian mare is set to reappear on Saturday at Caulfield when the Group 1 CF Orr Stakes will be the first race in a 2017 programme that could include a trip to Europe incorporating Royal Ascot, the King George and possibly even the Prix de l'Arc de Triomphe.

Trainer Ciaron Maher told racing.com: "We've looked into racing at Royal Ascot, trying to have her right for the King George. There's a vast range of races over there [in Europe] in her best-distance range.

"The Arc's at Chantilly, but whether she's up to that or not, we'll have to see how her form is, and whether she even goes or not. She may even stay here for the spring, and maybe the Vase in Hong Kong, so there are plenty of options for her."

The Hardwicke Stakes, won by the Queen's Dartmouth before she finished third in the King George, could be an ideal prep race for Jameka but Ascot director of racing and communications Nick Smith said he will discuss options with Maher when he flies to Melbourne next week on another recruiting trip.

“I've arranged to meet him in Melbourne next week and will be suggesting he looks at the Hardwicke Stakes as that's a no-penalty Group 2 over the King George course and distance," he said.

“But in Australia, it is more common to prep for the big target by going up in trip more gradually so the Prince of Wales's Stakes may come into play, and even the Queen Anne Stakes. The CF Orr Stakes is seven furlongs and that is where she is starting on Saturday.”

FIRST PUBLISHED 3:44PM, FEB 8 2017
We've looked into racing at Royal Ascot, trying to have her right for the King George