King George clash on as owners confirm Thistlecrack for race 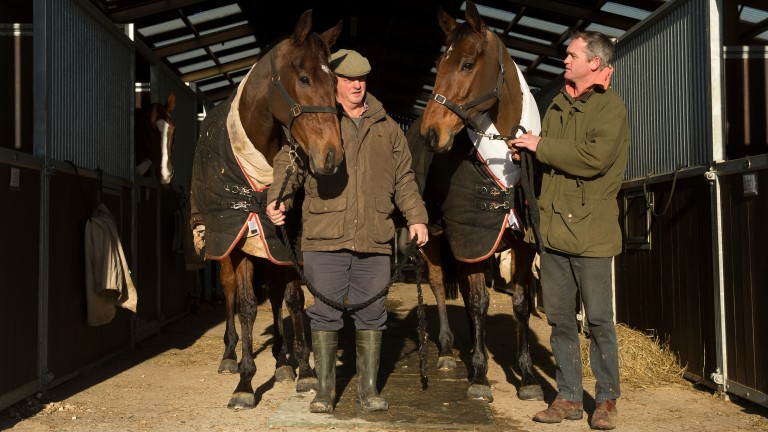 Thistlecrack and Cue Card will take each other on in the King George
Edward Whitaker (racingpost.com/photos)
1 of 1
By David Baxter 12:31PM, DEC 19 2016

The most eagerly anticipated clash of the jumps season is on, as Thistlecrack was confirmed for next Monday's 32Red King George VI Chase by owner John Snook.

Connections have been debating long and hard whether to let Thistlecrack step out of novice company into a race where he will face, among others, stablemate and defending King George champion Cue Card.

But Snook confirmed the match jumps fans are dying to see, as he told Somerset Live: "It's definitely the King George for Thistlecrack - it's always been my intention to go that way provided the horse has been coping with jumping fences and we think he has.

"His win at Newbury on Hennessy day confirmed that - there was nothing wrong with that performance - and provided he's 110 per cent on the day we'll be in the King George."

With the news confirmed, Thistlecrack was made as short as 11-8 for the King George with BoyleSports and Paddy Power, having been a 3-1 shot earlier on Monday.

While the addition of Thistlecrack adds extra spice to an already intriguing King George, it also has potential repercussions for the £1 million Jockey Club Triple Crown bonus.

Cue Card won the first leg, the Betfair Chase, but his bonus hopes would be dashed should Thistlecrack triumph.

Trainer Colin Tizzard has given his "full backing" to the decision of two his yard heavyweights doing battle, and said on At The Races: "We've been saying we'd leave a decision for as long as we could but felt it was only fair we told told people what we intended to do.

"The owners want to go for the King George and I'm full backing with it. Both sets of owners have sat down and talked about it. Both horses are in cracking form so should take their chance."

The confirmation of Thistlecrack may scare off some potential runners, but prior to the news, Gordon Elliott confirmed he is considering running Outlander.

Elliott was leaning towards the Lexus Chase at Leopardstown for the eight-year-old, but he could now head to Kempton instead.

The trainer told Betfair on Monday morning: "We're half-thinking with Coneygree out we might aim Outlander at it.

"Gigginstown have got plenty for Leopardstown so we might split them up a bit. He came out of the John Durkan very well and I might run him, all being well."