Graham Dench on an action-packed afternoon that promises so much 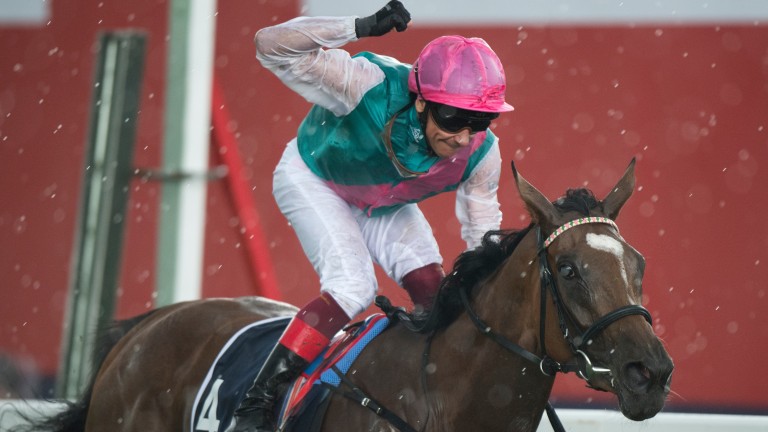 One way or another we've had more than enough drama this week, so on Saturday can we please just enjoy the racing!

It should not be too difficult, as there's plenty of it, with 57 races spread across eight meetings, and the very best of it would compare with the best on any Saturday this year.

The King George is a cracker. It's a shame the ten-runner field does not include the winners of any of Europe's three main Derbys, but it features six individual Group 1 winners and the presence of Oaks and Irish Oaks winner Enable is ample compensation.

Only the great fillies and mares have succeeded in a race traditionally dominated by the male of the species, and none has done it after winning at both Epsom and the Curragh, but John Gosden knows what is required.

He saddled Oaks winner Taghrooda for a clear-cut success only three years ago and he will have high hopes Enable can add her name to a list also graced by such as Park Top, Dahlia, Time Charter and Danedream.

One of only two three-year-olds in the field, with sex allowance added to 11lb weight-for-age she receives 14lb from her rivals, assuming Frankie Dettori's wasting has succeeded in slimming him down to 8st 7lb – and for a ride like Enable we can surely take that as read.

She was tremendously impressive both at Epsom and the Curragh, and while there is a suspicion we lack an outstanding middle-distance three-year-old colt this year, there's no question we have an outstanding filly.

Highland Reel out to join the elite

Highland Reel bids to join an exclusive club, for Dahlia and Swain have been the only dual winners since the King George was first run in 1951.

Last year he beat Wings Of Desire under a masterful front-running ride from Ryan Moore, but that was in a small field on fast ground and this scenario is trickier.

As short as 11-10 in places last week, Highland Reel has drifted to such an extent he is available now at as big as 5-1, much the same odds as Jack Hobbs, who he had back in last place when landing the Prince of Wales's Stakes at Royal Ascot last month.

Conditions might not be ideal, but Highland Reel, who is joined here by his little brother Idaho, is a six-time Group 1 winner and you underestimate him at your peril.

While the head says the King George will be won by Enable, Highland Reel or perhaps Coral-Eclipse winner Ulysses, the heart will be rooting for outsider Sixties Song and the bold party which has travelled all the way from Argentina to support him.

Sixties Song, the first South American-trained runner ever to race in Britain, is widely available at 66-1, but he's a dual winner at the very highest level at home since connections worked out he needed holding up.

Top-level South Americans have held their own in the States and the United Arab Emirates, and with a rating of 119 on the International Classifications he is not a forlorn hope.

If the King George does not present a hard enough puzzle, the fiendishly competitive Gigaset International Handicap ought to keep you occupied for an hour or two.

A Raceform algorithm has determined that nine of the last ten winners were either 'in form' or an 'improver', leaving just one theoretically harder-to-find 'sleeper'. However, that does not narrow it down that much and each of the market leaders has a question mark over him.

William Haggas would almost certainly not have chosen easy ground for Victoria Cup winner Fastnet Rock, and Roger Charlton was probably none too thrilled at seeing Makzeem draw stall one.

Chester Listed winner Viscount Barfield is 10lb well in but conditions- race form is notoriously unreliable when applied to handicaps, and Chester and Ascot are chalk and cheese.

As for one-time Classic hope Flaming Spear, he was devastating on the all-weather at Newcastle in the winter, but he's been off for 198 days.

Perhaps we ought to be looking for that rare 'sleeper'.

Could it be Ted's time at York?

Punters love an improving Stoute older horse, but that's not the only reason why Autocratic would be an especially popular winner of the Sky Bet York Stakes.

For Autocratic offers a great opportunity for Oaks and St Leger winning-jockey Ted Durcan following a wretched nine months during which he suffered not one but two separate ankle injuries.

The 44-year-old, often said to be one of the nicest men in racing and an important cog in the Freemason Lodge set-up these days, has a medical book that must look more like that of Sir Anthony McCoy, with whom he was apprenticed at Jim Bolger's, than most of his contemporaries on the Flat.

Compared to Racing Post columnist Freddy Tylicki, he got off lightly of course in that hideous melee at Kempton last October, but April's Leicester injury not long after his return must have been hard to take.

Group 2 success at York would help make up for some of the missed opportunities.

FIRST PUBLISHED 6:00PM, JUL 28 2017
John Gosden will have high hopes Enable can add her name to a list also graced by such as Park Top, Dahlia, Time Charter and Danedream